Stingfellow Hawke (Jan-Michael Vincent) and Dominic Santini (Ernest Borgnine) put the supercopter Airwolf through its paces in this week’s installment.

First up is Echoes From the Past, which aired 3 March, 1984, and was written by C.R. O’Christopher. When a mercenary claims to have a lead on String’s brother St. John, Hawke finds himself falling into a trap set by the Russians to get control of Airwolf. Convinced he crashed a helicopter and is waking up after having been in a coma for a year, the Russians, with someone masquerading as St.John, attempt to get Airwolf’s location from him.

However, with the help of a nurse (Michelle Nicastro), String almost gets away. When he’s recaptured, he agrees to take them to Airwolf, happy to find Dom already waiting for them.

One of the things they use to convince String that he’s been out of it for a year are fake newscasts, and papers. The main story they’re covering, the divorce of Prince Charles and Princess Diana (twelve years early, but weird right?).

String is put through the wringer in this episode, as one of the things that they tell him as part of their plan, is that Dom and Archangel (Alex Cord) are dead, and that they died rescuing St. John, so he has to deal with their deaths and the rediscovery of his brother.

Good thing it all ended up just being a Russian plan!! 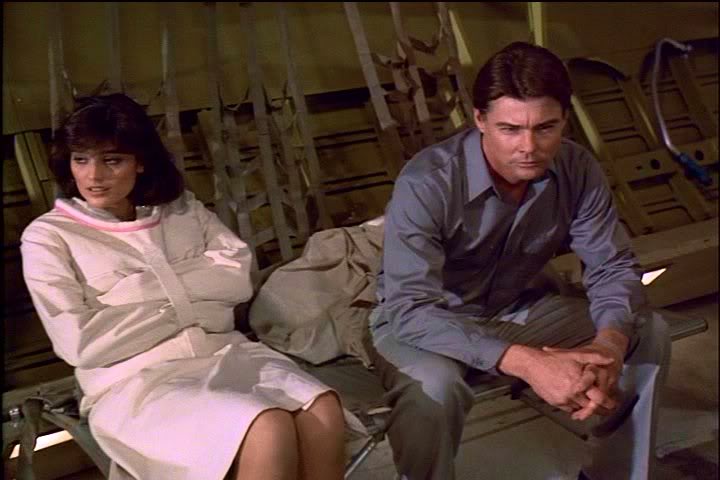 For Bond fans, there is a familiar face in this episode, Walter Gotell best known as General Gogol from the Bond franchise takes on the role of a Nazi-turned-arms-dealer. Having escaped prosecution by fleeing at the end of the war, Kruger (Gotell) is being hunted by Sarah Lebow (Tovah Feldshuh) for the death of her father, and as an operative for Israel.

String signs up for the mission, but is then shocked to find that Archangel is dealing with him, and supplying him with the latest missile defense system, which Kruger plans to sell to Iran.

String is troubled but takes on the mission anyway, until he ferrets out Archangel’s plan.

Once he knows what is going on, he and Dom fly Airwolf in to take on the missile system, outwit Kruger, and save the day once again.

Yes, at this point, stock footage is being used repeatedly, and each time Airwolf takes off from the Valley of the Gods, we get the same sequence of powering up and lifting off, but you know what, right now, it still works. The show is put together well, and the editing is tight enough on the aerial photography that yes you notice the stock shots, but it doesn’t ruin the story at all.

The playful banter between the characters sometimes seems a little forced, but for the most part, the main cast has a nice chemistry together, and the stories continue to be fun Cold War thrillers.