The Daleks return in this epic 12 part story written by Terry Nation and Dennis Spooner. The story ran from 13 November 1965 through to 29 January 1966. It featured a couple of stand out moments, including the first death of a companion, the Doctor breaking the fourth wall to wish viewers a happy Christmas, and the return of the Meddling Monk (Peter Butterworth).

The twelve episodes are titled The Nightmare Begins, Day of Armageddon, Devil’s Planet, the Traitors, Counter Plot, Coronas of the Sun, the Feast of Steven, Volcano, Golden Death, Escape Switch, the Abandoned Planet and the Destruction of Time. This is a huge story!!!

Picking up from the Dalek Cutaway episode a couple of posts back, we learn that the Daleks are up to no good and are on the verge of perfecting their latest weapon, the Time Destructor. We also learn that the Guardian of the Solar System, Mavic Chen (Kevin Stoney), in a grab for more power has allied himself with the Daleks, dooming the Earth and the rest of the planets so that he can cement more for himself.

The Doctor, Steven (Peter Purves), Katarina (Adrienne Hill) learn of the plan, and steal an essential part of the device, and flee. Unfortunately, during their escape, a hostage situation occurs, and Katarina is lost. An event that shows viewers for the first time, that not all companions will leave the Doctor in better condition than when they met him (though it can be argued that isn’t always the case).

The Doctor flees through Time and Space, only to come across the Monk again, who escaped the year 1066, and is now following the Doctor in hopes of some form of revenge, so much so, that it seems even he will temporarily work with the Daleks.

There’s a fun episode, Feast of Steven, that sees the TARDIS arriving on Earth for Christmas, and there’s a lot of funny dialogue, and moments, as our heroes run around a police station, and the cops believe that the police box is theirs. They also find themselves in a series of movie studios, which adds to a lot of fun, making for a nice light stop in the midst of the adventure to celebrate the holiday season.

Shortly after that, they find themselves visiting ancient Egypt, where the Monk gets his comeuppance when the Doctor removes a vital piece of his TARDIS, and the action finally ends up back on the planet of Kembel, where the Doctor saves the universe once again, but for the first time, it doesn’t come as easy as it has in the past. A number of folks die this time around in helping him, and it leaves one to wonder how long Steven is going to be around for.

It’s a fun story, a little longer than it needed to be, and in today’s era, the story would have been tightened up a lot, but it works, and despite the fact that viewing it was tough (we’re still in reconstruction territory), I really liked this one.

Next time, we have The Massacre of St. Bartholomew’s Eve! 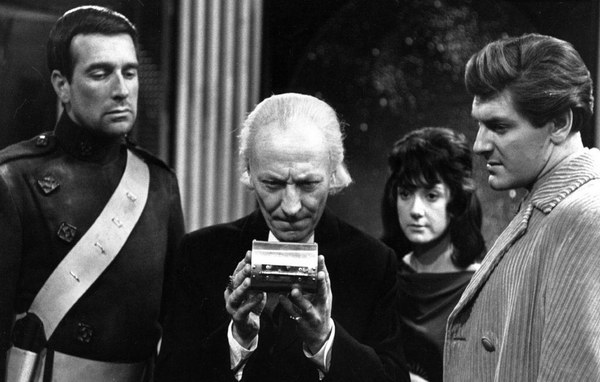