The first episode, written by Cannell, himself is a lot of fun. It originally aired 16 January, 1976, and features Wayne Tippit, back as Agent Shore, Becker (Joe Santos), Angel (Stuart Margolin) and Beth (Gretchen Corbett). The phone gag is all in Spanish, and is a phone call about radial tires.

Starring alongside Garner in this week’s episode is Rob Reiner as Larry “King” Sturtevant, a minor leagues football player who finds himself in a bit of a mess, after he records the mob making deals and contracts, and uses it to blackmail, and maintain his position on the team. When the mob has had enough, which is pretty much right away, Larry pulls Rockford’s name out of the yellow pages, and sets the mob and the Feds on him, by telling them that Jim has all the tapes with the incriminating evidence.

To say that Jim is less than pleased would be an understatement.

Reiner is great as a football player with delusions of grandeur and the assumption that everyone knows who he is, and I love the way that he and Jim interact, there’s some really nice comedic moments in this episode.

Of course, Jim has to find his way out from under the mob, distance himself from Larry, and prove that he isn’t the cause of all the problems.

A Portrait for Elizabeth originally aired 23 January, 1976, and was penned by Cannell as well. The phone gag is hilarious, as it’s hilarious. Someone named Harry is calling, and they’ve been waiting for two hours for Jim to show up with the forks for the lasagna.

Dave, a local lawyer hires, Jim, after Beth vouches for him, and gives him the gears a bit in the first scene together, to check out some things going on inside of his company.

Jim initially declines, but Beth convinces him, although seeing the two of them together makes Jim a little jealous, which he admits may be clouding his judgment on the case.

His instincts prove correct however, when things go sideways, and Jim finds himself wanted for murder, as well as on a number of federal charges.

It’s fun to see how jealous Jim gets when Beth is with Dave, and the way he snipes at the lawyer. It’s nice to Jim in that position, as I’m sure Beth must find herself in it with him on a regular basis, even though the relationship seems like a fallback position for both of them.

Cannell gave us a nice, one-two punch with this week’s installment, the only thing missing from it was some time with Rocky (Noah Beery Jr.)… maybe next time! 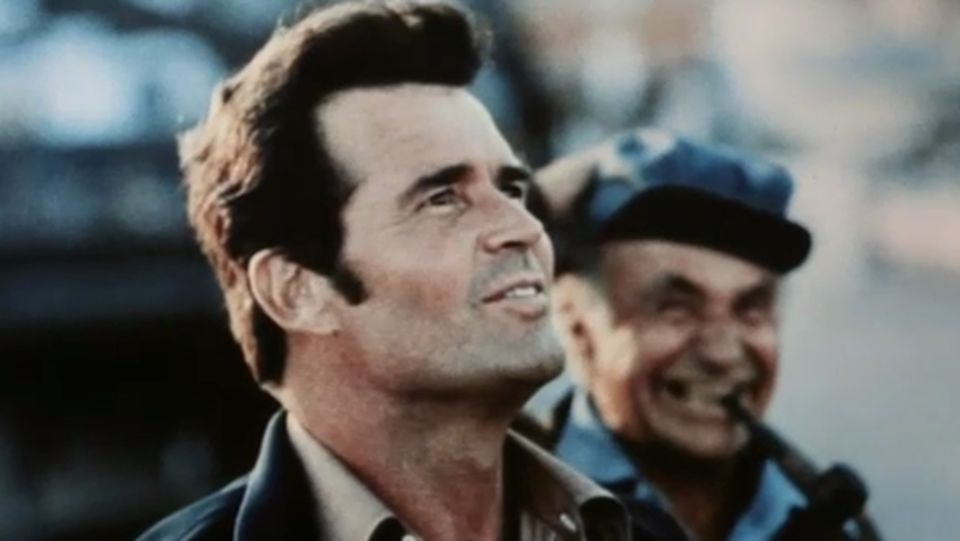