I so love this show! And this week it just kept getting better and better.

I’ve never come across a show that can balance drama, thrills, comedy and wrap it all up in one big conspiratorial bow, but Orphan Black consistently does that week to week.

From the introduction to someone a little higher up the Dyad chain, Marion (Michelle Forbes), to Kira (Skyler Wexler) making a sacrifice to help the ailing Cosima (Tatiana Maslany), to Cal (Michiel Huisman) realizing that someone is tracking him, to Mrs. S (Maria Doyle Kennedy) arranging deals with Dyad concerning Ethan Duncan (Andrew Gillies), to the physical abuse that Vic (Michael Mando) takes this week to Sarah pretending to be Allison pretending to be Donnie (Kristian Bruun), who learns a surprising secret… this week had a little bit of everything, and had me pinned to my seat from start to finish.

Delphine (Evelyne Brochu) and Cosima learn that the sample they used to create a ‘cure’ for Cosima came from Kira, which infuriates Cosima to no end, though when she shares the information with Sarah, Kira overhears and helps with the innocence and love of a child.

I’m curious to know how much information Duncan actually has on those trio of floppy discs, because there wasn’t a lot of room on those. 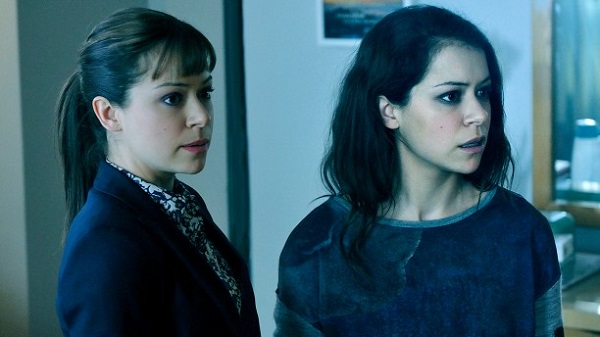 The best fun came from all the happenings at the rehab center where Vic is causing problems for Allison. Felix (Jordan Gavaris) comes in to help…  as an aside, I love the relationship Felix has with Allison. Things get even more complicated when Donnie and the kids show up for family day…

Orphan Black continues to be one of the smartest, and most entertaining shows on television right now.

I love introducing it to people who haven’t started watching it yet, and can’t help but give them a huge smile when they admit to now being addicted to the trials and tribulations of Clone Club.

I’ll be very interested in seeing what happened with Marion, now that we’ve been introduced to her. I think she has more control over Rachel than Leekie (Matt Frewer) ever did, but I also think that Rachel will only let herself be controlled for so far, and for so long before she strikes out on her own, especially now that she’s had a moment with her ‘father.’

The Prolethians and Henrik (Peter Outerbridge) were missing this week, but with so much going on, it was easy to let that plot line slide for a week.

But now, with only 3 episodes left to the season, you and I both know that things are going to escalate wildly from here on out, leading us to a breathtaking season climax that will have us clamoring for more right away!