Screening for the final time toady at the Scotiabank Theatre at 9:30 is this highly entertaining, often funny, film about no-budget movies, bad acting, ‘good’ kung fu, and lies.

In Moncton, New Brunswick, we are introduced to Elliot Scott and his girlfriend Linda. Elliot’s only desire is to be Canada’s kung fu star, like his heroes Chuck Norris and Van Damme. Proclaiming championship titles, he and a quirky bunch of characters that make-up his circle of friends and cast, Elliot writes, shoots, produces, directs, stars and does stunts for all of his films, from They Killed My Cat, to his latest work in progress Blood Fight.

Shooting on a zero budget, with Linda looking on in an increasingly disproving way, there are a lot of laughs to be had, as this baby-faced wannabe tries to play tougher than he really is. He and Linda do it all, however, and improvise and create as best they can, though it’s readily apparent that Linda is growing very tired of the relationship, the promises, and being the only breadwinner in the family.

Travelling from Canada to China, and back again, Elliot is intent on making himself seem more of a star than he is, and he’s not above lying to do it, but sooner or later, some of these lies, as well as what appears to be infidelities begin to catch up with him, and the film makes the shift from goofy comedy to painful reality. 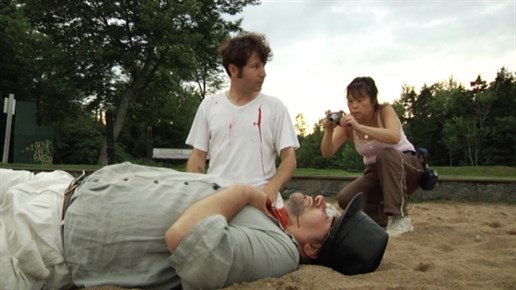 Fantasy and reality don’t always mesh as well as one would like, and when we’re no longer laughing at (or with) Elliot, we start to see that something else may be going on.

The camera maintains its objectivity, almost to the last-minute, letting everything simply play out before it’s lens, and there is a lot to see, there’s the joy of people being creative, wanting to think of themselves as stars, artists and creators, there are dubious, and sometimes foolhardy actions on Elliot’s part, and there is the growing, heart-chilling tension, that begins to arise between he and Linda.

Two years of shooting, culled down into a 90 minute, exceptional experience, which by film’s end went in a direction I did not see coming.

The first half of the film actually got my own imagination firing, thinking, I should really get out there, and start shooting the ideas that we’ve being toying around with here behind the scenes of The Mind Reels, but the second half is so full of shocks and surprises that my mouth agape, and my head was shaking sadly in denial.

This one is a lot of fun, earnest, honest, funny, revealing, and troubling. It’s a perfect mix and is highly entertaining.

If you haven’t had time to see it yet this week, try to make time for it tonight, you won’t regret it.