Marilyn Monroe stars alongside Tony Curtis and Jack Lemmon in this hilarious film that is the next title in Great Movies – 100 Years of Film.

Curtis and Lemmon are Joe and Jerry, respectively, a sax and bass player in a speakeasy in 1929. Unfortunately, they’re both rather broke, and have just witnessed a gangland massacre.

They take the first opportunity to get away from town and make money, playing for three weeks in Florida, all expenses paid. The only problem is… it’s in an all-girl band.

Donning drag, Joe becomes Josephine, Jerry becomes Daphne, and they clamber aboard a train south with the rest of their new band mates. What follows is a hilarious series of sequences as the boys strive to control their libido surrounded by lovely women, including the stunning Sugar Kane (Monroe). 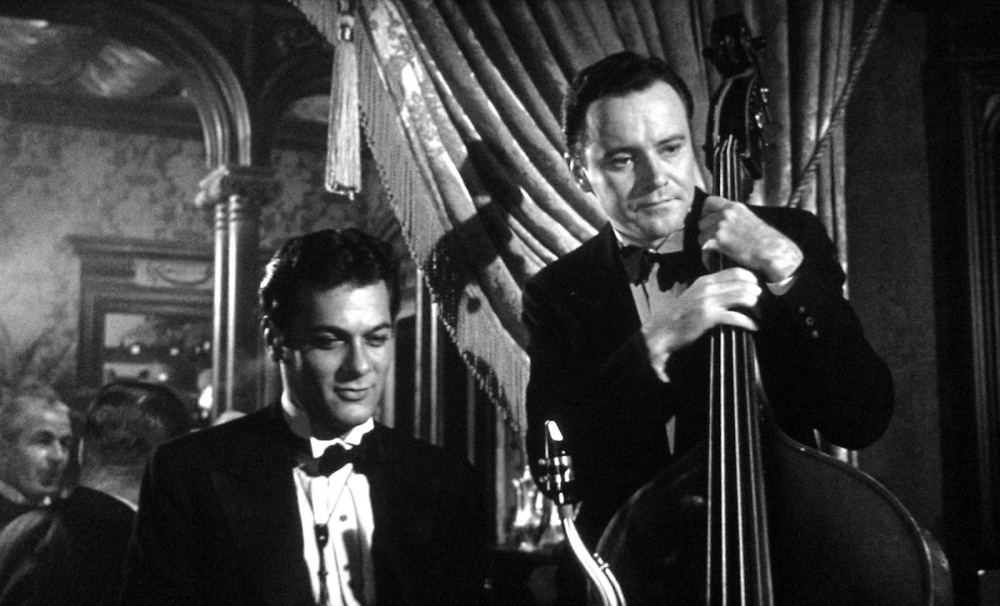 Right off the bat there’s a bit of a rivalry between the two men for Sugar’s attention, and the party in Jerry’s bunk becomes downright hilarious.

In a quiet moment, Sugar reveals the type of man she’s looking for to Josephine, and Joe has it all mapped out on how to win her over when they arrive in Florida. Donning a suit, and his best Cary Grant accent, Joe works to win Sugar over, making her think she’s doing the wooing, while Daphne flirts and dances with Osgood Fielding III (Joe E. Brown), who has the last line of the film and it’s a great comedic moment.

Curtis and Lemmon are in top form, wandering about in dresses and heels, working to keep their figures together, avoid flirtatious bellboys, and keep their secrets safe. Add that in to Curtis changing clothes constantly as he switches into his millionaire persona, and you have tons of laughs brought on by the physical comedy and the brilliant dialogue.

Monroe is simply stunning, and looks fantastic, wooing the audience as much as she woos Curtis’ Joe. She has some great moments, and while not always the strongest actor in the film, it’s arguably one of her best performances.

Things take a turn for the worse when the gang members who were responsible for the massacre show up in Florida, led by Spats (George Raft), and he’s the one who sees through their disguises right off the bat, and the chase is on again.

As most comedies of the time did, we end with a chase that sees all of our stars reunited at its end, the revelation to Sugar that Joe is Josephine and the millionaire (but not really that rich) and Jerry tires to make the same revelations to Fielding with laugh out loud results.

I was absolutely delighted to settle in and revisit this film, as I cannot recall the last time I saw it, and hazard to guess it may have been back when VHS ruled the world, so coming to it now, with more knowledge and appreciation for film, I loved it all the more.

What did you think of it? What is your favorite Marilyn film? Happily the recommendations for this film include a couple more of her films… stay tuned!