This week’s episode was originally aired October 11, 1974 with a teleplay by Cannell based on a story by Roy Huggins, and is a bit of a fun romp, despite the fact that Jim Rockford (James Garner) is left in right after the phone gag, which this time features Laurie calling from the trailer park to let him know that a space has opened up, should she hold it, or will the police let him stay where he is?

The episode opens with Jim digging up a grave, and upon opening the coffin of Charlotte Duskey (Susan Damante), finding it empty, two thugs show up, and Rockford takes a bullet close the skull!

As he is languishing in the hospital, we flashback to the beginning of the case. He is hired by Sandra Turkel (Sian Barbara Allen), a newspaper reporter who wants him to find a missing co-worker, Charlotte, but only if she can oversee every aspect of the investigation. Rockford tentatively agrees, though he finds her annoying to start.

As they begin to chase down leads, we learn fairly quickly that Charlotte is, apparently, dead. The description of the woman doesn’t exactly match though, and Rockford and Sandra decide to continue withe their investigation.

Posing as an insurance agent, Rockford chats with the doctor who signed Charlotte’s death certificate, and runs down more leads. 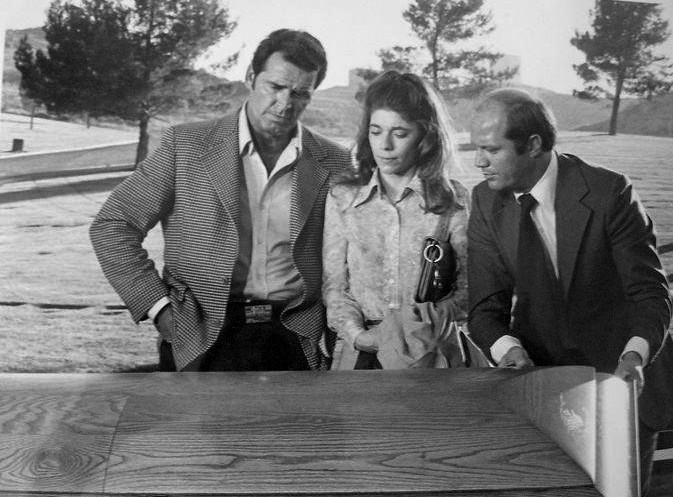 Rockford points out, as he’s creating new business cards to pose as a funeral home representative, that they are being followed. Jim confronts their pursuer, who identifies himself as IRS agent Stoner (George DiCenzo) who is working on the Duckey case.

Realizing it’s an open case, despite the fact that Rockford has his suspicions, he steps away from the case, though he decides to follow the casket to its resting place. While on the train to their destination, Jim poses as a doctor, learning that Stoner is aboard, and they trap him in a cabin after its revealed he’s not a real IRS agent.

Assuming Stoner’s identity, Jim and Sandra investigate the cemetery and find the empty coffin. The next of kin address leads them right to Charlotte however.

It seems she’s appropriated a bundle of money from a bunch of thugs who want it back, and she faked her own death to be left alone.

Something still doesn’t ring true for Rockford, and on re-investigating the graveyard, is shot.

Two weeks later, he’s released from the hospital, and both Stoner and Sandra confront him over who has the money. He tells them both different names, and we, just like Jim, are left to wonder at the episode’s end, who really does have the money?

This one was a fun ep, watching Rockford pretend to be a variety of people, watching him get his info, get screwed out of part of his fee (again), and the fact that everyone in this episode seems to be lying to or conning everyone else!

The only things missing were appearances by series regulars, Rocky (Noah Beery Jr.), Beth (Gretchen Corbett) and Becker (Joe Santos), but perhaps they’ll return next time when I cover the two-parter This Case is Closed!

Do you remember Rockford?