From the off Peter Jackson’s second installment in The Hobbit trilogy feels like a stronger, more confident picture than it’s still enjoyable predecessor, An Unexpected Journey. Based on the novel by J.R.R. Tolkien, the characters have already been established, as well as a large portion of the journey has already been undertaken. Threats have been established, and character motivations are understood, this time, we can jump right into the film and join Bilbo (Martin Freeman), Gandalf (Ian McKellen), Thorin (Richard Armitage) as the quest of the Lonely Mountain continues.

Jackson and his fellow screenwriters, including Guillermo del Toro, continue to expand the world of The Hobbit, tying it in more securely to the world Jackson already established with The Lord of the Rings. We see the One Ring taking more of a hold on Bilbo, we learn that an old evil has awoken – one with a familiar name, and something has been reborn, all while Thorin leads his companions onwards to the Lonely Mountain to reclaim the Arkenstone, and drive out the dragon, Smaug (Benedict Cumberbatch) that resides there.

Along the way, Gandalf leaves the party to run down a mystery posed to him by Galadriel (Cate Blanchett), which sees Radagast the Brown (Sylvester McCoy) joining him. 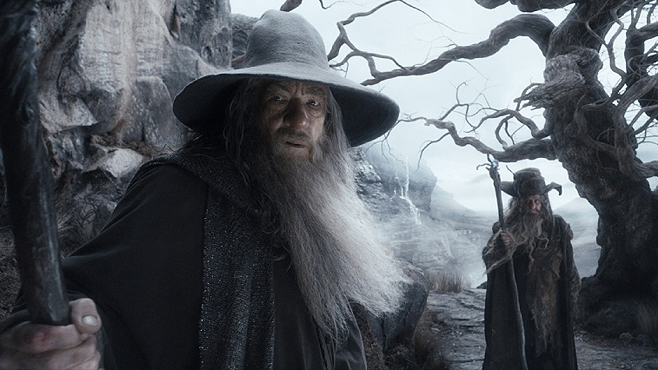 The company of dwarves, with Bilbo in tow, must travel the dark paths of Mirkwood Forest, avoiding the threats there, both creature and elf, but inevitably falling afoul as both. The Mirkwood elves are presided over by King Thranduil (Lee Pace), father of Legolas (Orlando Bloom), who is a little darker than some of the elves we’ve encountered on-screen before, and Pace exudes, not evil, but definitely a bit of a threat. He’s also not afraid to remind others of his and his son’s position, as he does with Tauriel (Evangeline Lilly), who apparently Legolas is fond of, but who may in fact have eyes for Kili (Aidan Turner).

The dwarves are still being pursued by Azog (Manu Bennett), though he and his fellow Orcs are called back to Dol Guldur, and we learn about some serious trouble growing there.

I love how the Beorn (Mikael Persbrandt) sequence and Mirkwood is handled, with the heaviness of it, the sense of illusion and confusion as the company becomes lost in the forest. The silhouette transformation of Beorn was a great moment, though I missed the actual scene in the book, when the dwarves show up singly and in couples, slowly imposing on Beorn.

I found myself really enjoying the river barrel sequence – it starts out fun, and even a little light-hearted, before becoming an all-out fight for survival. This is something I think can be applied to the whole movie, it starts out rather light, but by film’s end, it is a fight for survival, as Smaug rages, Gandalf is trapped, Darkness is rising…. and oh so much more.

Unlike The Two Towers, which I LOVE, this one is a much darker ending, making it The Empire Strikes Back of this trilogy. The final film will see Smaug vanquished but also the Battle of the Five Armies, as well as interweaving the expanded Middle Earth mythology Jackson is incorporating into the film series.

This is definitely the stronger of the two films, and was a welcome trip back to Middle Earth, with a beautiful score by Howard Shore, of course.

I love Gandalf’s showdown in Dol Guldur, watching the wizard work his magic is one of my favorite moments, because like a hobbit, sometimes I only remember him for his great dialogue, and his fireworks… He is undeniably my favorite character in this trilogy, and I love every moment McKellen is onscreen.

They finally reach Lake Town with the help of Bard (Luke Evans), which is run by the Master (Stephen Fry), with rumors of a prophecy about the King Under The Mountain, Laketown helps the dwarves out, as they make their final trek to the mountain, and Bilbo and company have a chilling confrontation with Smaug.

Running at 161 minutes, this was one that I could have sat through with even more, I knew the battle of the five armies was going to be in the next film, but I was ready for it there and then.

If Gollum was the technical marvel of Lord of the Rings, the creature design and animation for Smaug must be the one for this film, because, honestly, I was worried about a talking dragon. But with the design, and the menace Cumberbatch imbues his voice with, Smaug totally works, and you get a sense of devious and wicked intelligence behind the creature’s eyes.

Richard Taylor and his folks do an amazing job again on costume and design, the world is real, it’s lived in, and each of the races we come across has a history and an existence within that world.

Freeman walks a fine line with Bilbo, knowing exactly when to play a comedic moment, and when to play it straight, he has very much made Bilbo his own character. 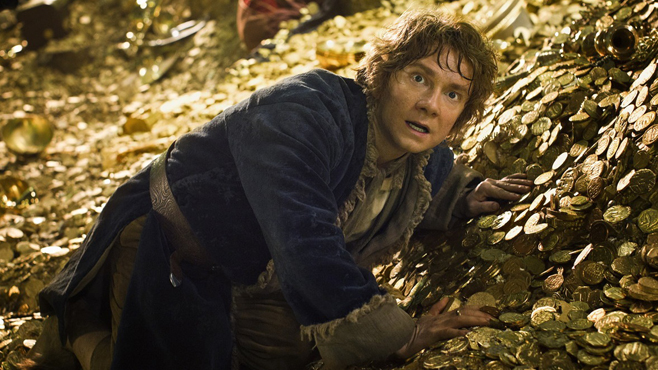 Each of the dwarves have their own moments, though happily, none of them come across as goofy as some of the moments in the first film, particularly the stuff at Bag End. Gloin (Peter Hamblelton) gets to mention his wee lad, Gimli to Legolas, Kili and Fili (Dean O’Gorman) have some nice brotherly moments, but I felt Bofur (James Nesbitt) didn’t get enough time this time around.

I walked out of this one, so much more satisfied than I did the first film, which I did love, but was no where near the level this film reaches. This one welcomed me back to Middle Earth in a big way, and I cannot wait to see how things wrap up for our characters in the final installment (and I’ve even read the book countless times, and know what happens!).

This one, is well worth seeing on the big screen, especially in 3D and in IMAX if you can swing it.

Did you get a chance to get out there and see it this weekend? What are your thoughts?