The 101 Sci-Fi Movies list brings this combination of sci-fi in the vein of War of the Worlds and an Irwin Allen disaster flick, with a huge dose of popcorn entertainment thrown in as good measure. Now that being said, this film isn’t with its eye-rolling cheese, and its questionable plotlines… the most famous of which is using a Mac to hack an alien computer system and upload a virus, and the fact that the rest of the world was sitting there on their haunches waiting for the Americans to do something… Anyway.

But the film, despite all it’s flag waving, doesn’t take itself overly seriously, and has an all-star cast to make you forget how bad some of the story actually is.

Take a look at this roster… Will Smith, Bill Pullman, Jeff Goldblum, Vivica A. Fox, Judd Hirsch, Mary McDonnell, Brent Spiner, Adam Baldwin, Randy Quaid, and Harry Connick Jr. Not bad right? The entire cast is stocked with familiar faces, and they all totally embrace the popcorn aspect of this big screen romp.

On July 2nd, something starts to interfere with our communication satellites, and SETI picks up an unusually close unknown signal, minutes later, reports are coming in all over the world that large ships, 15 miles across, are sliding into place over major cities all over the world (except apparently Canada, I’ve seen this movie a number of times, and we don’t get mentioned once, perhaps we were hidden behind all the flag-waving…) – shades of V! 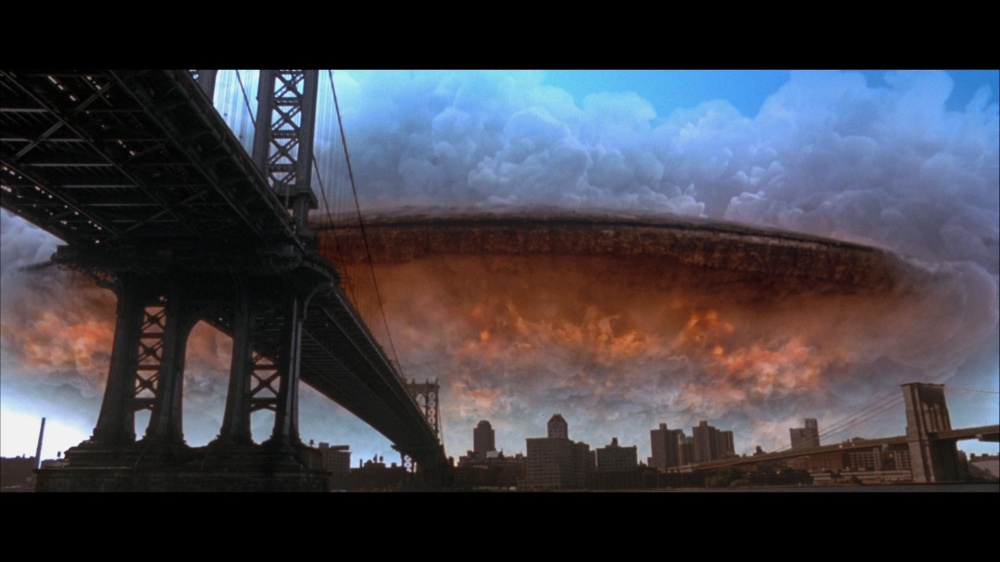 As the chips position themselves, one man figures out what they are actually doing, David Levinson (Goldblum) who tells everyone he knows to flee the city, and races to track down his wife Constance (Margaret Colin), who serves on the President’s (Pullman) staff. Escaping the White House just in time, the aliens launch a brutal one-sided assault on the citizens of Earth, intent on driving us to extinction and then using up the rest of our planet’s resources.

But we’re determined to fight back!

So while lives, loves and relationships are torn asunder, new ones form, alliances are made, and David and Captain Stephen Hiller (Smith) are recruited to fly the recovered Roswell craft to the mothership, upload a virus that will knock out the protective shields for alien fleet, and then the rest of the world will launch a last gasp assault.

The film is big and fun, and probably Emmerich’s best, though Stargate will always be a favorite of mine, and is certainly better than the films he made post ID4, they just didn’t have the same sense of big operatic fun.

The film doesn’t dip too often into schmaltz, but it’s there, death scenes to try to pull at your heart-strings, and make you more invested in the idea of going after the aliens, because it was war before, but now it’s personal…

Don’t get me wrong, I sat there and enjoyed my rewatch of this one, but even when I first saw it, on opening day no less, I walked out having enjoyed it, but questioning a lot of the goofier plot points.