This week’s episode is bottled to run the length of one broadcast of News Night, something I’ve wanted to see from the beginning of the series.

And while, everything seems to be going smoothly on air, viewers are only seeing part of the story, there is so much going on around and in the news room as stories break, lies exposed, lives are almost ruined and reclaimed.

As Will (Jeff Daniels) is about to go to air, his phone rings, and though he doesn’t answer it, he sees its his dad calling. His father was an abusive alcoholic, and used to beat he and his mother until Will stood up to him, and cracked a bottle across his head.

Ignoring the call, the show begins.

We’re in March 2012, and while Maggie (Alison Pill) and Jim (John Gallagher Jr) are waiting for an audio file of George Zimmerman’s 911 phone call to finish downloading,  Jim gently chides her about her condition, she’s wearing the same clothes she was the day before, and while it’s not affecting her work, yet, she has occasionally been working in an intoxicated state. It’s been 6 months since the events of Uganda and she is still shaken up.

Sloan (Olivia Munn) is called in to chat with Charlie (Sam Waterston) and Reese (Chris Messina). It seems some pictures of Sloan have appeared online, compromising pictures, the fallout of a bad breakup. Sloan takes herself off that night’s show, and seeks solace in a darkened office, though Don (Thomas Sadoski) joins her and tries to help, all while trying to get a story pulled that has him cited as an anonymous source.

It’s infuriating that someone would do that to Sloan, and by extension any woman. It’s a low breed of subhuman that would post an ex’s private photos online for others to see. You’ve proven you’re not even human, and should be treated like dirt. It doesn’t mean you won, it just means you have no morals or ethics and are incapable of seeing anything beyond your own egotistical worldview. Pathetic. You hurt and you want your ex to hurt worse, that’s vile. In this scenario, her ex gets a bit of the comeuppance due him, and it’s a great moment for her.

Mac (Emily Mortimer) is talking with a boy who wants to come on the show to talk about the suicide of Taylor Clementi, because he was forcibly outed by Dharun Ravis and Molly Wei. The young man wants to take this private intimate thing, his sexuality and use Taylor’s tragedy to come out to his parents. All of this is going on while she is dealing with a man who may be trapped in a collapsed building after an explosion, or is she? 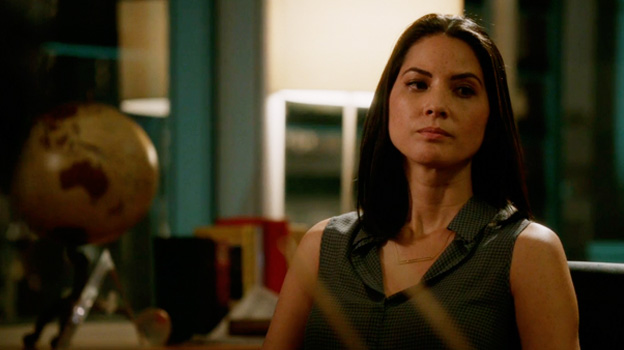 Charlie has a visit from a friend who works in the intelligence agency, who comes to let Charlie know that they know he’s got people looking into the black-op known as Genoa and that if it comes out that sarin gas was used, it’s a violation of the Geneva convention and would make those who did it war criminals. The agent tries to pose the hypothetical of the extraction being done for Charlie’s son if he was a Marine, wouldn’t he want anything to be done to get his son back? Charlie doesn’t bite. And honestly, I believe that Charlie would want his son back, but would never condone a war crime be committed for it to be accomplished.

There are so many things going on in this episode, all within the space of a single broadcast, and it’s done so well, and we get to see how much of a professional Will is, when he finally gets through to his father’s phone.

Aaron Sorkin’s drama continues to take me in each week, constantly fires my desire to learn more about events and politics in the world around me, as well as the events they are covering in the episode. It continues to be smart and involving television.  Sadly this puts us at the halfway mark, and July 2014 is a long ways off (I can probably rewatch Season 1 and 2 a couple of times before then…)

The Newsroom airs Sundays on HBO.