I love when the 101 Action Movies brings me a favorite to rewatch, and I do love my Bond films, alongside For Your Eyes Only, The Spy Who Loved Me is one of my preferred outings of Roger Moore as 007. 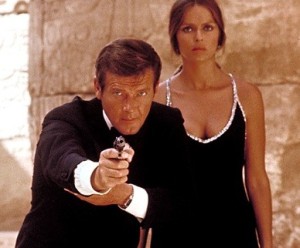 Curt Jurgens is the madman this time playing Stromberg, who is looking to start a nuclear war by firing American and Russian missiles from stolen submarine, so life can start over beneath the waves. To help him is the towering Jaws (Richard Kiel) with his custom-made steel teeth (too bad they completely neutered him in the next film in the series Moonraker)!

Along the way Q (Desmond Llewellyn) outfits Bond with an underwater-enabled Lotus, and one of the first jet skis.

It’s worth noting that the model work, not just on the giant tanker but also Stromberg’s underwater lair is amazing to look at, and a lot of it continues to hold up very well. Ken Adam’s production design, a staple of the Bond series by this point, continues to be stunning, everything just feels larger than life, and everything Adam created simply helps create the Bond World.

Moore gets some nice moments, one of the best is the rather cold murder of an assassin who is hanging over the edge of a building by Bond’s tie. Once James gets the information he needs, he casually bats the man’s hand away and the baddie falls to his death. That’s an edge we didn’t often get to see to Moore’s Bond. There’s also a reference to the late Tracy, the only time Bond has ever married, and he bristles when that information is brought up.

In the end, this one is pure action entertainment, an enjoyable ride at the height of what one could refer to as the ‘fun’ Bonds, before a more serious tilt was given to them in later years (yes I said that with a straight face).

This one continues to be a joy to rewatch, and it’s great to see a movie that simply insists on having fun and showing its audience a good time.

This one succeeds wonderfully.

What’s your favorite Moore Bond? (and Moonraker is NOT an acceptable answer).