Yup, almost caught up! I’m ready for tonight’s episode and should have that ready to go at some point tomorrow!

I highly enjoyed this episode, it’s not easy so early in the run of a series to do not quite a flat-out comedy, but really play up the humorous side of a story while still advancing the driving plot of the season.

Will Pascoe wrote this episode, putting Graeme Manson’s and John Fawcett’s characters through their paces in a way you wouldn’t expect…

Allison (Tatiana Maslany) still suspects that Donnie (Kristian Bruun) is her watcher and takes it one step too far, by nailing him with a golf club and then tying him to a chair to interrogate him with a glue gun!! 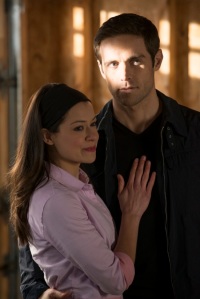 Paul (Dylan Bruce) and Sarah learn a little bit more about each other, though it’s fair to say that they are both keeping things back from the other. We know Paul was in the military and is now a merc, sorry, contractor, who really isn’t sure what the tests are that are being done on Sarah as Beth, he’s just there to keep an eye on her.

Things go hilariously sideways for Sarah when Allison calls her to come and help her with Donnie, completely forgetting the fact that she and Donnie are supposed to be hosting that month’s neighborhood potluck… Oh the joys of suburbia.

Sarah interrogates Donnie as Allison, Allison is drinking her troubles away as she plays hostess, and Felix (Jordan Garavis) serves as bartender.

Things really go sideways when Vic (Michael Mando) and Paul show up, Vic following Felix, and Paul following Sarah. Things get wicked when Vic and Paul square off, and Allison’s neighbor Aynesley (Natalie Lisinska) must think all manner of things about her neighbor…

It’s not all laughs though, as Kasima continues her little flirt with Delphine (Evelyne Brochu) (and who can blame her?!) and they attend a lecture on Neolution at Delphine’s urging. 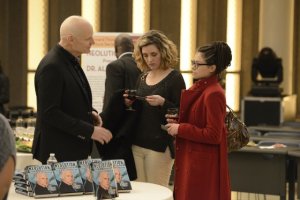 The lecture is given by a Dr. Leekie (Matt Frewer) who is forwarding a number of ideas, that may tie back to the genetic manipulation that led to the creation of the clones.

A theory which may have some merit to it, with the reveal at the episode’s end, that Leeki and Delphine already know each other…

Although how Leekie fits in with Olivier (David Richmond-Peck) I’m not sure, or perhaps they don’t and there are more parties at work than we know of.

This show continues to be so well-crafted and smart. At no point has the series talked down to its viewers, it treats them intelligently and engages their intellect and their emotions.

Tatiana continues to rock it, watching Sarah try to get the glass away from Allison, who leans away from her long enough to finish her wine was a brilliant moment, and I had to remind myself that it was the same actor playing both roles. It’s stunning to watch, everything changes from character to character, posture, voice, hair, mannerisms, and then watching each clone pretend to be someone else, you can tell it’s say Sarah behaving as Beth or vice versa, it’s not just simply Tatiana acting as one or the other, AMAZING!

If you aren’t watching Orphan Black, you are missing out on some stellar television… Catch up now, especially now that we know they are coming back for a second season.

An all new episode airs tonight on Space!