The Visitors arrived 30 years ago this week.

Kenneth Johnson’s aliens who came to earth posing as our friends while hiding not only a horrible appearance but an equally terrifying agenda premiered with the original mini-series V.

The sad thing is, I wasn’t allowed to stay up and watch all of it, and we certainly didn’t own a VHS recorder in 1983, too expensive!! I got glimpses of red uniforms, and wraparound sunglasses, strange voices, giant saucers hanging over cities, cool laser guns, and these pristine white wedge shaped shuttles that could be augmented to larger sizes or reduced to a fighter capacity.

There was a news reporter, Mike Donovan (played by Marc Singer), a pretty scientist Juliet Parrish (Faye Grant), and a seductive Visitor who was alternately frightening and oh so attractive… Diana (Jane Badler).

I could piece some of it together, I talked about it on the playground with my schoolmates who helped me piece together everything I missed. They told me that the Visitors were actually lizards underneath their human masks. That freaked me out. I knew they were bad, but I’d been sent to bed long before any of these revelations.

But then, I got to see the opening of the next night’s episode, and when we got that “Last Time on V” and there’s Diana’s jaw extending, there’s Mike Donovan fighting with a Visitor and his face tears away to reveal that reptilian visage… just wow!

This was huge to me.

At that age, I hadn’t been introduced to, or even been able to seek out any of the old alien invasion movies of the 50s. THIS was my first experience of aliens coming to Earth in an aggressive way. Sure there had been Star Wars, but that was in a galaxy far, far away. E.T. was just lost, those aliens in Close Encounters just wanted to talk to us. 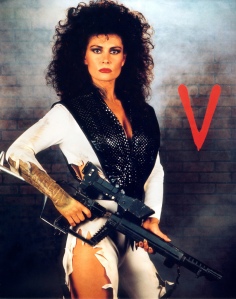 These things were coming to Earth with ulterior motives. And when I learned one after another what they were, our water, and us as food… my imagination was afire! This was amazing storytelling as far as I was concerned at all of 11 years of age. These aliens were here! And we were going to fight them for our planet…

But I had to wait…

At about the time we heard we were being posted to Bermuda, the second mini-series V: The Final Battle (this and the series did not have Johnson’s involvement as the story was not going the way he had originally planned it), was starting to air. Again, I wasn’t allowed to see all of it, but I knew there were human sympathizers and a fifth column (though I had no idea what that meant) amongst the Visitors. There was the likable Willy (Robert Englund) and Martin (Frank Ashmore) both of whom worked with the resistance led by Julie and Mike.

Then there was Ham Tyler (Michael Ironside), who as far as I was concerned was only exceeded in coolness by Han Solo, Captain Kirk, and Indiana Jones, and not necessarily in that order (usually depended on the day of the week). He was a badass!

I was desperate to see all of it, to know the story. Final Battle? Did we win?

As we prepped for our departure to Bermuda, I was allowed a book for the plane. I chose A.C. Crispin’s adaptation of both miniseries into one big book, which at 400 pages was the longest book I had read at that time (and I devoured it voraciously a number of times).

I didn’t get the Nazi overtones of the invasion, the insignia, the camps, I didn’t know about those things in any real context at that age, I just knew they were bad.

Then after the move one of the necessities of living on the island was a VHS player (when we moved there Bermuda didn’t have a television broadcast of any kind, it was only with the Olympics that we were given ZBM, with a second channel being added about a year later) it was revealed that my friend Tony, a fellow Canadian whose family had been posted to Bermuda, had a copy of V: The Final Battle recorded from its original broadcast.

I watched it repeatedly, and by the time Tony was asking for it back, I’d done something I’d only done with Star Wars, Star Trek II and an episode of Tales of the Gold Monkey… I held my tape recorder to our Zenith television and recorded it to audio tape. Yup, the entire thing. And I listened to it. A lot.

Then, through good old Starlog magazine, I learned that a television series was in the offing.

Great… and no way for me to watch it.

There had to be other venues I could follow for what would have to be an awesome show. There was no doubt in my young mind that it was going to be amazing.

In fact I was browsing the Annex on the American base and there were 2 books! I spent my hard-earned babysitting money to buy The Pursuit of Diana (Allen L. Wold), based on the series opener, and The East Coast Crisis (Howard Weinstein and A.C. Crispin), which told the story of the Visitors but from the perspective of those in New York.

I’ll be honest, when I first read East Coast, I didn’t like it. It was all new characters, a complete coast away from those characters I knew and loved, except for an appearance by Tyler and his cohort Chris. But as more novels came out, giving tales of other places experiences with the Visitors, I revisited it, and greatly enjoyed it.

It also inspired me.

I had been dabbling with creative writing for a while, and as I continued to collect each book as it arrived for sale on the book racks, I started penning my own, filling 108 pages of a notebook with an adventure called V: The Bermuda Invasion. It featured myself, my friends Sean, Kerri, Trevor, Gina, Tara, Leah, my sister, all of our parents, my crushes Stephanie and Teresa, we fought the invasion as best as we children could, amazing our parents with our skills and abilities, and I even gave myself a glorious death, which was, of course, suitably mourned by all the girls.

I still hadn’t seen any episodes of the new show (totalling 19), though new friends, as they arrived on the island, warned me that they didn’t like it, and for some reason the aliens voices no longer reverberated when they spoke (budget restrictions meant nothing to me at that age).

But there were other venues, the books, a short-lived comic series from DC (18 issues),and if I thought the series was bad when I finally got to see it on its release to DVD, these comics were equally horrid, though it still wouldn’t curb my love for the show and its concepts.

They even had their own trading cards and stickers released through Fleer. V was everywhere, though I tend to think that they missed out on a great marketing opportunity by not releasing the toys that Donovan’s son, Sean (Nicky Katt) plays with in the original mini-series.

In 2008, original series creator revisited the world he created in the novel V: The Second Generation, which picked up 20 years after the invasion on an occupied earth, the Resistance all but quashed, and the signal Juliet sent into space at the end of the first mini-series being answered…

Then, in 2009, we got a chance to be invaded again, overseen by Scott Peters (the creator of The 4400), with a re-imagining of the original series, which saw Morena Baccarin as the face for the Visitors this time around (with the equally lovely Laura Vandervoort as her daughter), able to control her crew and even people by ‘blissing them.’ This series was cut short way too quickly, just as things were beginning to come together. There were appearances by original cast members in new roles, the series was nicely updated and reflected the worries and political climates of our time, and just as we’re truly preparing to fight back led by Erica Evans (Elizabeth Mitchell)…

For all that, the world Kenneth Johnson created, and the characters that came to life in it still have stories to tell, there are some of us, who even 30 years on, want more.

There are days I look up at the sky, and wonder what we would do, if we saw a giant saucer slide in over the CN Tower… and what if we found out that they weren’t as friendly as they pretended to be. Who would fight? Who would aid them? Who would win?

I think it’s definitely time to revisit the original mini-series the sequel, the first series, and the re-imagined series…

What were your favorite moments? Characters? 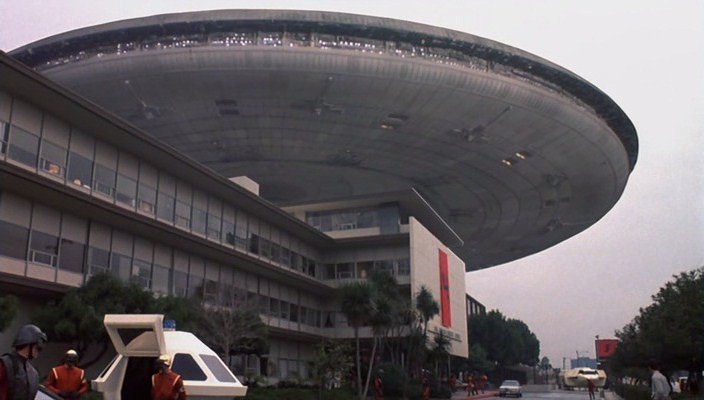