12 is my lucky number, so I figured that would be the number of films I pick for my favorites of 2012, it kind of works, because then that would be one each month, though, for anyone who reads my blog, you’re well aware that I’ve seen a lot more than 12 movies this year!

12) The Expendables 2 – It’s loud cheesy 80s action fun with some of the biggest action icons to have ever been assembled for a movie – of course it’s going to end up on my list. For sheer mindless, good-times entertainment, this is a film series that after 2 films cannot be beat, and with rumors of a third one in prep (with Jackie Chan joining up) it looks like they may be around for a while as well. This time around Stallone and his band, including the ever-cool Jason Statham, is joined by Liam Hemsworth, Jean-Claude Van Damme, Chuck Norris, and expanded roles for Bruce Willis and Arnold Schwarzenegger.

The action is loud, noisy, bloody, and oh so much fun!

Seeing this in a theater with a bunch of people who love action movies as much as I do was a lot of fun, not to mention stars Terry Crews and Randy Couture were in the audience with us.

I will be the first one to say this series of films will never win any of the big industry awards, but that doesn’t change the fact that they are just good fun, and I cannot wait for the next one! 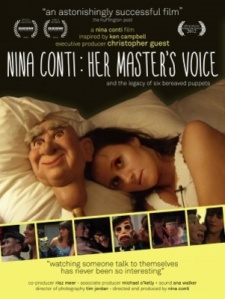 11) Her Master’s Voice – This was the first documentary that I saw at 2012’s Hot Docs, and I think because of that it will always have a special place in my heart. We chatted with the film’s subject and director, Nina Conti, about ventriloquism, her mentor, her sidekick Monkey. Up til that point I had never seen any artist lay themselves out so bare in front of the camera, all of her armour comes down as she carries on conversations with herself though her puppets.

The film follows Nina on her journey to Kentucky to an annual ventriloquist convention, while standing at a cross-roads of her life, deciding whether she still wants to carry on with her act, or leave it behind. When news of her mentor’s passing and his gifts to her sets her on an emotional journey of self-discovery, we are taken along for the ride, and see every moment of pain, joy, tears, and hope.

This ended up being my favorite film at Hot Docs because it was something truly heartfelt, and ventriloquism and puppetry has always had a special place in my heart.

10) Hitchcock – I always find behind-the-scenes movies to be fun, especially when you have such a fantastic cast as Anthony Hopkins, Helen Mirren, Danny Huston, Scarlett Johansson, Toni Collette, James D’Arcy, Jessical Biel and Michael Wincott. Combining a mature love story with the creation of one of Hitch’s most popular films, Psycho, the craft pays homage to Hollywood of yesteryear and made me nostalgic for a time that I never knew.

I have also never seen Ms. Johansson better in any film she’s done, she simply embodies Janet Leigh, and brings her to life right before your eyes. Course everyone has to be at the top of their game when you put to heavy hitters like Helen Mirren and Anthony Hopkins on the screen.

The film chronicles the love story of Hitch and his wife Alma while he struggles to make a film that none of the companies wanted to see made. They all thought it would be just another run-of-the-mill horror film… but what happens when one of the world’s best directors makes a horror film.

I’m looking forward to reading the book it’s actually based on, but this film was just a sheer delight.

9) American Mary – I chatted with the Soska Twins briefly after one of the screenings of this year’s Toronto After Dark Film Festival, and I couldn’t rave enough about their genre-defining body modification horror/thriller. It ended up on this list because it was one of the films that I was really anxious about seeing, because I was worried about how graphic the film would be. Despite it’s visuals, the film has a restrained beauty that verges on the brilliant. I remember walking out of the theater completely stunned and amazed by what I had just seen. I had done a complete 180 from my expectations and perceptions of the film. Any movie that can do that to me is worth noting.

Katherine Isabelle is simply amazing, and stunning in her role, and watching her transformation from naive med student to a modification artist is a treat to watch. The Soska Twins now have a permanent fan in me, and I can’t wait to see what they come up with next.

8) Brave – Oh, Pixar. How I love you. I look forward to each year’s new film and it is very rare that I am disappointed by them, and even their lesser films (I’m looking at you Cars 2) can entertain. This year’s effort took us to the wilds of Scotland, with a stunning story of a mother, Elinor (Emma Thompson) and a daughter, Merida (Kelly MacDonald), queen and princess respectively, and their relationship. I didn’t even know that going into the film, I just knew that Merida was a headstrong girl, who wanted to decide her own fate, who didn’t want to be told who to marry… And I knew there was a big dangerous looking bear.

What I didn’t know about it, made the film that much more enjoyable when certain events kicked in. Pixar has always been a master of character-based animated stories, making sure that the quality extends not only through the art of the film itself, but also through the story and the characters that inhabit the world they have created.

Pixar films always tend to be a highlight of the year for me. 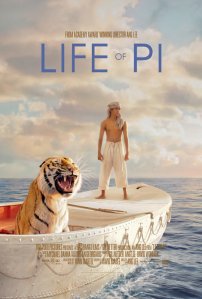 7) Life of Pi – I loved this book when I first read it, it was an incredible journey, and was understandably anxious when I learned they were adapting it to the big screen. Ang Lee however was not only faithful to the novel, but did some of the best 3D work I’ve seen in a movie yet. The tiger, Richard Parker, is brought to life with amazing realism, combining live-action and CG work, blurring the lines between reality and fiction. It’s amazing to see this lumbering beast surviving alongside fellow traveller Pi (Suraj Sharma) as they struggle to live on the high seas, hoping against hope for rescue, battling the elements and each other.

The story is personal, while being epic at the same time, and all the green-screen and CG work that went to stranding Richard Parker and Pi on the ocean makes the film look amazing! There are so many picture perfect moments in this film, a movie that is filled with humour, heartbreak, and ruminations on storytelling itself.

6) The Last Will & Testament of Rosalind Leigh – Everyone knows the story how Sue and I came across the booth for this film at Fan Expo and were taken in first by the poster, then the trailer, and the photo area. After we approached the director Rodrigo Gudino about a chance to see the film, both of us were struck by this beautifully crafted and creepy film.

Aaron Poole is on-screen for nearly every moment of the film and does so by himself, all though there is a haunting voice-over narration by Vanessa Redgrave, and it’s also one of those films that surprises you by the end of the film, allowing you to see everything that has gone before it in a whole new light.

A fantastic effort from the founder of Rue Morgue magazine, that deals with ideas of faith, love and family surrounded by creepy-ass angel statues… 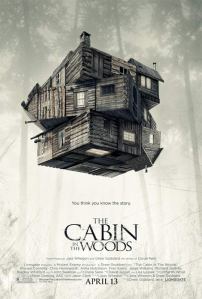 5) Cabin In The Woods – Drew Goddard and Joss Whedon turned the horror genre on its head with this brilliant film. Taking the traditional horror trappings of the remote cabin, and the stereotypical characters one finds in that vein of horror film. Once the film kicks into gear, there are nods to almost every horror genre, as well as characters.

And despite the subject matter, and the amount of blood spilled the film ends up being more of a comedy than a horror, and every moment of it is entertaining. For anyone who knows and loved their horror films, this and the number 3 film on my list should be viewed and enjoyed often.

Commanded by the fantastically cool Nick Fury (Samuel L. Jackson), Earth’s mightiest heroes take on an alien invasion, led by Asgardian Loki (Thomas Hiddleston), who makes a fatal mistake when he confronts fan fave, and recurring Marvel universe character, Agent Colson (Clark Gregg). Their next team-up is a few years off yet, but at least we’ll have new individual adventures from Tony Stark, Cap and Thor soon… 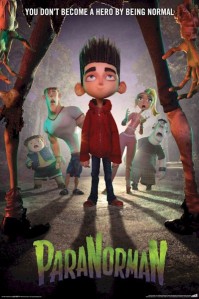 3) Paranorman – This film was a sheer delight, in that I just didn’t expect it to be as amazing as it was. I’m a huge stop motion animation fan, and add to that a fun story that features zombies, a witch’s curse and a message that doesn’t hit you over the head repeatedly, and you have a family film that is truly suitable, and enjoyable, for the entire family.

The ring-tone, the hockey-mask, the sight gags, and on top of that, it really is a great story filled with great characters, some laugh out loud moments.

The effects on the witch towards the end of the film, are some of my favorites, a brilliant combination of practical stop-motion and CG effects.

Of course knowing it was being released by Laika who also gave us the exemplary Coraline, I should have realized that it would be as amazing and as enjoyable as it is.

2) Skyfall – Daniel Craig’s 3rd outing as James Bond ends up being one of my Top 5 007 films of all time. Directed by Sam Mendes, and featuring a fantastic score by Thomas Newman, and a powerful title track by Adele, Skyfall ends up being one of the best looking films I have ever seen. The cinematography is top-notch, and there are character changes and introductions, putting familiar pieces back on the secret agent board. Daniel Craig is top-notch in this film, bringing that dangerous edge which defines his Bond.

The film starts on an epic scale, and races towards a small, almost intimate climax in northern Scotland. There are some fantastic stand-out sequences, and Judi Dench has so much more to do this time around as her entire department is put on trial while she is targeted by Javier Bardem’s Silva.

Fantastic fun, and hopefully they get back on the track of releasing a Bond film every two years, and Craig will stay with the role for a few more years yet. 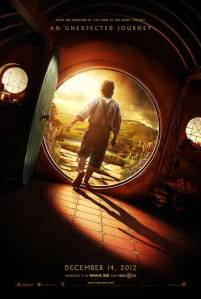 1) The Hobbit – I was so happy to step back into the world of Middle Earth. Tolkien’s world is brought to life once again by Peter Jackson, creating a place I would happily call home. Expanding on the text of the original novel, and incorporating the legend and lore that was happening at the same time as Bilbo’s (Martin Freeman) expedition with Thorin Oakenshield (Richard Armitage), Gandalf (Ian McKellan) and company to the Lonely Mountain. Is it as great a film as the original trilogy? No, but it still stands head and shoulders (which is tough for a halfling) above a lot of the other films I’ve seen this year.

As of this writing, I still need to see it in the 48fps frame rate (another excuse to see it of course) but I simply delighted in seeing familiar places, faces, and setting out on a whole new adventure. Ian McKellan brings Gandalf back to the screen, and the Shire made me weepy again.

For me this was a pitch-perfect film that I loved.

What were your favorite films of 2012?