I am way late to this party. But jonesing for more Aaron Sorkin, I do love The Newsroom, I thought I would try out The West Wing. I couldn’t get into it when it aired simply because I didn’t much care for politics. Now, I find it a much more fascinating subject, so thanks to Amazon, I have all seven seasons, in an awesome boxed set, to work my way through.

The series had me from the get first episode, I love the way the dialogue snaps, how fast it is, how idealistic it can be, how it embraces the faults, the follies, the foibles and the triumphs not only of people but, in this case, a nation.

The series is set in the West Wing of the White House, with a democratic president, Bartlet (Martin Sheen) seeing over the nation.

The series doesn’t focus exclusively on the president however, it follows the interactions, the politics and the lives of the President’s senior staff.

There is Rob Lowe, who plays Sam Seaborn who serves as the Deputy Communications Director.

Dule Hill as Charlie, the Personal Aide to the President.

The incredible John Spencer is Leo McGarry, the President’s Chief of Staff.

A favorite of mine, Bradley Whitford takes on the role of Josh Lyman, the Deputy Chief of Staff.

Every one of the cast bring their A-game to the series, and it raises the performance of every one of the actors around them. This is an amazing cast, and they all have so much to do all the time. There are so many great story threads, character moments, and perfect little beats that can make you laugh, or wipe away a tear.

The series takes on issues that still seem to be coming up today, school vouchers, flag burning, gays in the military, gun laws, separation of church and state, campaign funding, sex education, the death penalty, lobbyists, so many things that are still surfacing in politics today.

But it’s not all politics, there is humor and levity, watching these actors deliver dialogue that you know they must love delivering. You can’t help but become engrossed in the characters and the stories.

While I’m sorry to have come to the show so late in the game, I’m glad that I have 7 seasons to marvel and enjoy. I know Sorkin leaves the show at the end of season 4, so I’m rather dreading that moment, but hopefully the show stays strong (no spoilers please).

The production design is amazing, and the series looks like a theatrical film each and every episode, this is some quality programming.

I love the look at politics, the way things play out in this world…

But most of all, it’s the characters, and the rat-a-tat-tat of the rapid fire dialogue that keeps drawing me in, making me smile, drawing a tear, and the fact that if the political animals that inhabit the jungles of our own world had the same intelligence and idealism that permeates this show, things could be different.

I’m not saying I’m running for office, but I think I’m a little more engaged in the political world than I was.

And then, when I came to the end of the first season… wow! That is a cliffhanger!

An assassination attempt, with a credit roll before you know who’s been hit.

Season 2 is ready to hit my screens! 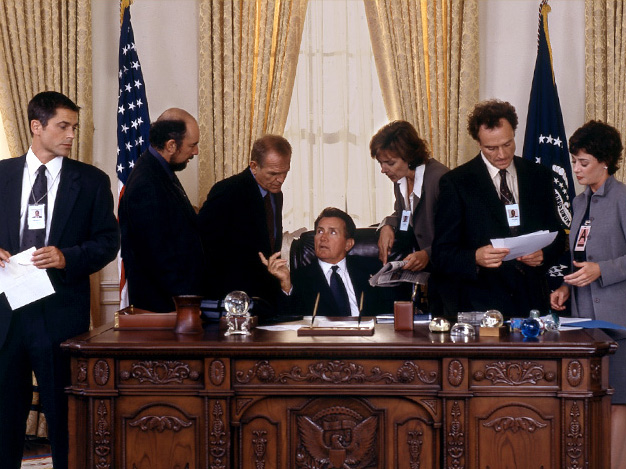