The Return of the King… oh… I cried…

It was also recognized by the Academy as the Best Film of the year, but personally, I think like a lot of the fans, we see the Oscar as recognition for the work, the effort and the love that Peter Jackson and his fantastic cast and crew put into the gargantuan task of bringing JRR Tolkien’s beloved story to life.

As with the previous installments, I had to be there opening night, December 19, 2003, and spent a good portion of that weekend in the same seat as my companions changed on either side of me.

And after two epic films, this third one, brilliantly finished up the series, every one of the characters had more than a fair share of moments, Howard Shore’s score soared making souls cheer and hearts weep.

I love how the beginning of the film sees most of the heroes, but for Sam (Sean Astin) and Frodo (Elijah Wood), back together, and celebrating the victory at Helm’s Deep, knowing that this us the last moments of joy they may have together. 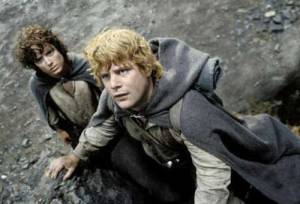 As epic as the first two films were, the third chapter just seems to blow the others completely out of the water, everything we’ve seen up to this moment has been nothing but prologue for everything that happens in this film, and it is still stunning.

I often forget how much I love it, until I sit and watch it, letting my heart soar with Howard Shore’s incredible score.

And it was because of John Noble’s performance as Denethor, the Steward of Gondor, in this film that I couldn’t watch him in Fringe for the longest time. He so completely became that character I could no longer separate the actor from the art. (Eventually though I was able to , and now quite enjoy Fringe).

This of all the films, speaks to me of loyalty and friendship… when Aragorn and company are standing a the Black Gate calling on Sauron, and Aragorn (Viggo Mortenson) leads the charge, looking over his shoulder to quietly call to his friends… “For Frodo.” Chokes me up every time.

Course Sam’s line “I can’t carry it for you… but I can carry you!” My throat tightens just thinking about it.

Perhaps that is why for the last quarter of the film, tears tend to be really close. Which is one of the reasons I was ok with the ‘multiple endings’, like I said, I didn’t want to leave…

This film also contains one of my favorite shots, it’s just a quiet moment, with one of my favorite characters, Gandalf (Ian McKellen) – after the attack on Pelennor fields, and the White Wizard is sitting alone in the courtyard. It speaks of pain, loneliness and the weight of war and decision.

I’ll be the first one to admit though that Legolas (Orlando Bloom) surfing the Mumakil is a bit much.

For all that, it remains a truly great film, still taking me in, holding my attention, engrossing me in the same manner those films that shaped me as a child did and still do.

I know The Hobbit is going to be lighter fare, it’s just that kind of story, but I long to see The Shire again, to spend time in Bag End, to see Mirkwood, Beorn, and Smaug.

Will it be in the same level as these films? No, I don’t think it possibly could be, I do expect to enjoy it though.

I also can’t wait to hear what Howard Shore has cooked up musically for the adventures of Bilbo Baggins.

The Lord of he Rings film trilogy shaped a huge part of my life, and as I said a couple of days ago in my post about Fellowship, these films brought to life Middle Earth almost exactly how I saw it in my mind’s eye. It was as if someone, Peter Jackson, Fran Walsh and Philippa Boyens had poured the visual images of my mind onto the screen, and scored it with one of my most favorite scores ever (that wasnt penned by John Williams).

And as much as I would love to be more of an Aragorn, I’m definitely more of a Hobbit, content to wander about in bare feet, and enjoy the grass under my toes, to revel in the sun and friendship, and I do like a good meal…

“The road goes ever on and on, down from the door where it began…” and even if I’ve treaded some of those paths before, I can wait to rewalk them again.

My favorite book, made a beautiful series of films, and soon enough, I will be revisiting the lands I love (and I just reread my copy of The Hobbit as well).

What were your favorite moments in the Lord of the Rings? What are you looking forward to most with The Hobbit?