Elmore Leonard is one of the most prominent American crime writers and his short story, Fire In The Hole serves as the jumping off point for the series Justified. It was developed for FX by Graham Yost.

Yost has had his fingers in a number of projects I’ve enjoyed, most notably Band of Brothers and From The Earth To The Moon, two HBO series I love! So I finally decided it was time to watch it on Netflix.

Now I need to tell you, I’m not Timothy Olyphant’s biggest fan. I don’t hate him, I’m just rather indifferent to him. This first season has happily cured me of that. I enjoyed his performance in this far more than I ever did his turn in the brilliant Deadwood. Although both of them are fantastic takes on the western genre.

Olypant plays Deputy U.S. Marshall Raylan Givens. In the season opener he’s working out of the Florida Marshall’s office, until he pulls on a criminal he’s warned to leave town.

With this latest shooting on his list, he’s reassigned, and sent to the one office he would never want. Harlan County, Kentucky. His home town.

This is a town with all kinds of problems, many of them caused by Givens own family, specifically his devious father Arlo (Raymond J. Barry), a childhood friend turned white supremacist turned religious nut, Boyd Crowder (Walton Goggins), and his threatening, Kentucky crime family father, Bo Crowder (M.C. Gainey). Throw in his ex-wife, Winona (Natalie Zea) and her real estate husband, Gary (William Ragsdale), and Ava Crowder (Joelle Carter) who kills her husband, Boyd’s brother and then takes up with Raylan, you’ve got a heap full of trouble, and you know Raylan should’ve stayed away.

The writing is sharp, and often funny, giving the modern police procedural a very southern, and Western genre twist. Olyphant is engaging as Raylan, a man who is very focused on the right and wrong of justice, and may be perceived as a 19th century Marshall (10 gallon hat and boots included) in the modern world, though he tends to get a little muddled when it comes to his personal life.

The first season has a number of stand alone episodes, but there is a season story at play as well, and it all comes to a head very quickly, with unexpected allies, and shoot outs, hostages, double-crosses, and love affairs.

I’m quite taken with this show at the moment.

I am also delighted to see Nick Searcy at work as Chief Deputy Art Mullen, Raylan’s boss. This is an actor, who, as far as I am concerned does not work enough. He’s got a great voice, presence, and I always love when he shows up in something I’m watching.

There are some great bits and stories in the first season, I love seeing Raylan and Arlo butt heads, especially the further into the season we get, because Raylan, and the viewer knows, Arlo really isn’t a good guy. Also of interest is Boyd journey as he moves from white supremacist bomber to a possible religious convert and bomber. There’s a great scene where Art blows up at him for perverting religion for his own use. 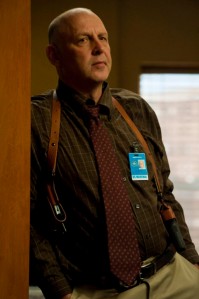 I was truly surprised by how much I enjoyed the first season, I mean, did we really need yet another police procedural? Honestly, no. But if you’re going to do it, shake it up a bit.

And they did do that!

Raylan is a hero in the classic western sense, he knows whats right and wrong, he’ll give you fair warning, but if you’re gonna reach for a gun, he’s going to pull on you and put you down. That may have worked in dusty towns at the end of the 19th century, but those actions nowadays carry more consequences, and they tend to pile up around Raylan. He’s also the first one to tell you that he only pulls when he’s left no other choice.

And coming from Olyphant, I believe it. Raylan is my kind of hero, and I hope he comes out on top, but I don’t expect him to always come up smelling of roses.

I’ll be very interested to see where the story goes from here, what happens with Raylan and all those people of Harlan County. I guess I’ll be heading back there soon… (thanks to Netflix!)