This time the 101 Sci-Fi movies brought me Forbidden Planet is smart science fiction. It has a sharp story, top notch acting, and the soecial effects are close to amazing! The starcscapes, the designs, the costumes, and of course Robby The Robot, continue to engage.

A sequence featuring our stalwart captain JJ Adams (Leslie Nielsen) chastising Altaira (Anne Francis) for the way she’s dressed and how can she blame the way his men react when they see her is decidedly dated, or at least should be so considered.

Based loosely on Shakespeare’s play, The Tempest, the story follows a United Planets Cruiser, C-57D (Firefly fans may recognize that number as belonging to the ship that crshed on Miranda) as it arrives at Altair IV to discover what happened to the Bellerphon, lost 20 years previous.

The captain, and the crew find only two surviviors, Dr. Edward Morbius (Walter Pidgeon) and his daughter Altaira, seen over by their robot Robby.

We learn that Morbius has discovered the secrets of a long dead civilization known as the Krell, and has been boosting his intelligence with their equipment, but we learn it has side effects.

It’s created a “Monster of the id”, a projection of Morbius own fear, anger and hate, and it begins to hunt down the crew one by one, until Adams and Altaira, now lovers (very Captain Kirk) confront him.

Nielsen is fantastic here, long before his comedic turns in Airplane, the Naked Gun series, and countless spoof films, he took on some more serious fare. His Captain is a forerunner for Star Trek’s Kirk, though maybe not as brash.

The only thing I didn’t care for, and this applied to almost all of the early sci-fi films, is that there is no sense of motion aboard the cruiser, and consequently feels llike nothing more than a set.

Beyond that however, the story is still smart, and it still plays.

I still can’t get over the level of effects at work in the film, this was before Star Trek came along a decade later, and two decades before Star Wars. The effects for the Id monster were created by hand-drawn animation but works so well, especially when it interacts with the cruiser’s crew, attacking them as it continues to increase in size. The modelwork, matte paintings, even the blaster fire are fantastic and they were nominated for Best Effects for the 1957 Academy Awards, losing out to The Ten Commandments. Oh well.

It was also the first film to introduce the idea of doing a film’s soundtrack with all electronics, it’s a little odd, and strange, but works for the film, it adds to the alien feel of Altair IV with its green sky and double moon.

There are moments of comedy, brought by Robby the Robot, as well as one of Adam’s crew, the cook (Earl Holliman), known as Cookie, especially when the young man learns that the giant robot can reproduce alcohol.

The film makes for a great matinee over the weekend, pop up some corn, grab yourself a rootbeer, sprawl out on your couch, or cuddle up with someone and explore the wilds of Altair IV and the self-created monster that lives there. 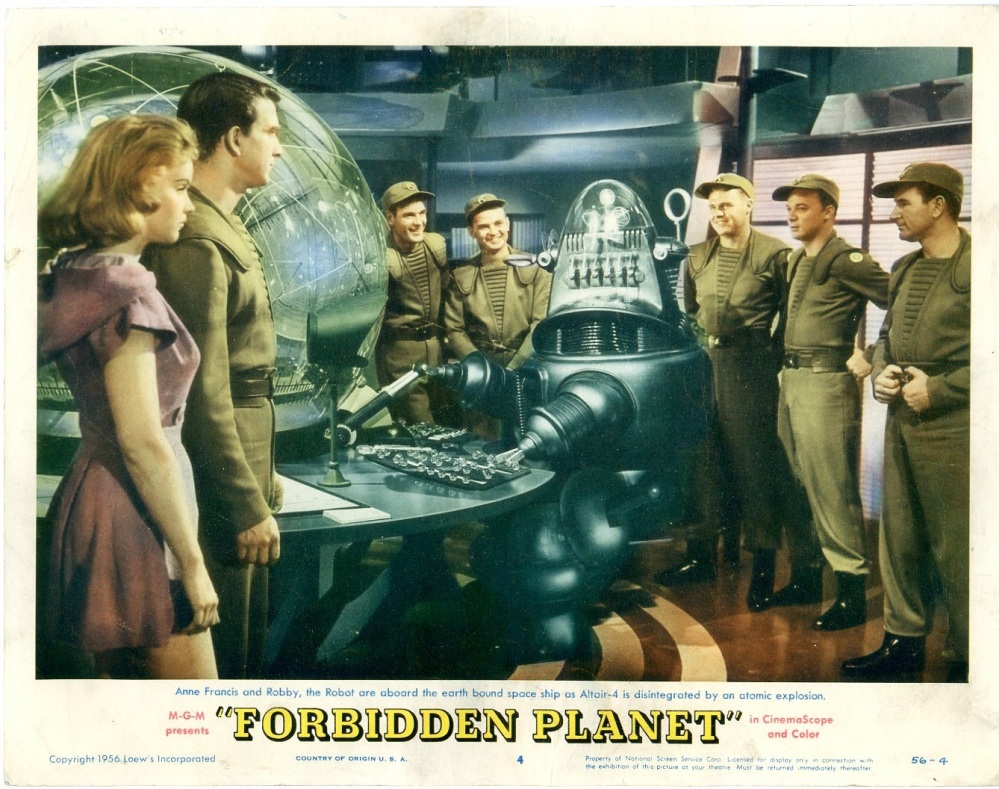