Have I mentioned yet how much I love the darker path that Haven is taking so far this season?  The stakes have never been higher for our heroes in so many ways, and the fact that the Troubles are getting creepier and more…far-reaching…this season, just goes to show how much more everyone has to lose this time around.  Maybe everything ends the night of the Hunter meteor shower, but I’m thinking that’s not how it’s going to go.  Especially if the Colorado Kid really is still alive.

Besides, the memory wipe that Audrey 2 experienced last season was – I believe – meant for OUR Audrey, and had that been successful, it would have been well before the Hunter, so I have to wonder how much is different this time, in terms of Haven and the Troubles.  It’s almost like Sarah/Lucy/Audrey are getting closer to changing the whole thing before each reset, so I’m curious to see what Audrey is going to do this time, either before she disappears, or in order to not disappear at all.  I love this show!!!

Okay, so, this week, we have a crazy case of involuntary organ donation.  Basically, one family’s Trouble involves their organs beginning to fail, and they need to harvest new ones, preferably from a family member to have the best chance of getting a match.  But all of it happens much more quickly than it normally would, and the afflicted person is equipped to swap out their failing organs with healthy ones.  Through the use of a nasty-looking tongue-tube thing.  The troubled person sucks a healthy organ from a relative, and expels their own neatly onto the ground like some kind of grisly hairball.  It’s disgusting and kind of fascinating all at once. 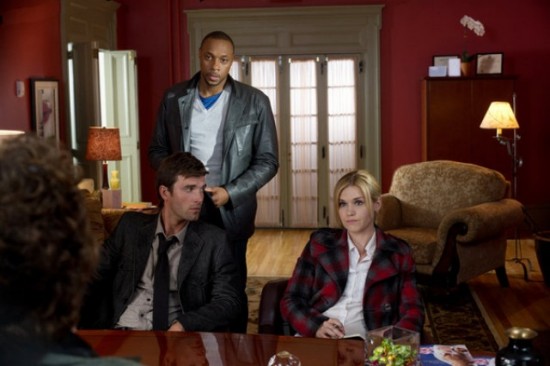 Now, here’s the thing.  Should the intended victim manage to escape their organ-losing fate, then THEY’RE Trouble is activated, and their own organs begin to fail, as well.  So they then need to start sucking healthy organs out of family members, as well.  Vicious cycle to inherit, really.

So, last time the Troubles were in town, this kid manages to get away from his father’s attempt to harvest an organ, which in turn activated the Trouble in him, as well.  He decided to put a backup plan in place, just in case the Troubles ever returned to Haven, and fathered a whack of children through a sperm clinic in town (he doctored the records to hide his trail) and went on to have a pretty large family of his own, just in case he needed more spare parts down the road and didn’t have any of his illegitmate children handy.

Watching this episode, I was pretty sure I knew what Audrey was going to ask Duke to do in the end, but I wasn’t sure how he would handle it.  Especially not after his uplifting speech to her about choosing his fate and not giving into hers without a fight.  I heart Duke.  🙂

I wasn’t surprised when he turned her down, really, though the dude was dying, anyway, once they’d gotten his son away from him in the woods.  His organs were failing at a more rapid rate, and it was just going to be a matter of time.  But I think that every time Duke take a life, it changes him somehow, too.  More than just the blood-absorbing thing, and the silver eyes and the super-strength.  I think maybe something more happens…like maybe some part of him dies inside, or something.  Like a sacrifice.  Maybe.  So I wasn’t surprised when he walked out of the woods and left Audrey there with the dying Troubled man.

Nor, however, was I surprised that he went back and killed the guy without anyone knowing.  The kids who’d escaped all got better…everything was better.  Except possibly Duke, but I have to think he made the right choice in doing it.  He’s angry with himself, of course, and even angrier with Audrey for asking him, but if there’s one thing I’ve learned from watching the first two seasons, it’s that – even when Audrey doesn’t know what she’s doing – her instincts are never really wrong.  Following her blind lead is still better than trying to decide everything alone, and I think that’s part of what made Duke turn back.  Mostly, though, I think it’s because he saw the boy starting to turn into what his father had been, and the idea that another person would grow up needing spare parts or die trying was more sickening to Duke than the act of killing the father who was at death’s door, anyway.  It really just needed to be Duke’s choice, not anyone else’s.  The look on his face when talking to Audrey at the end, though…well done, Eric Balfour.  Really well done.

In other news, there’s a new cop on the scene, Det. Tommy Bowen (Dorian Missick) from Boston, who seemed pretty cool – until he ends up killing an unseen intruder and burying him/her at night in the woods.  And he’s staying in town for awhile.  Interesting.

By the way, was he staying in the same hotel room that Audrey got coccooned in back in season one?  Looked very familiar!  😉

I still can’t get over the fact that Nathan got that tattoo.  it’s bothering me more than it should, I guess, but I really thought he and Duke had come to some kind of tentative alliance/understanding, at least until Audrey was abducted.  And, incidentally, Nathan must have gotten the thing before Audrey was abducted…so what was he thinking?  It’s sort of scaring me, to be honest.  Being mad at Duke for the tacks as kids is one thing, but going out and getting a tattoo that’s supposed to be on his future killer?  Knowing that it’s the one thing that terrifies him most of all (and that the guy Nathan didn’t even know was his father had, too)?  I don’t know.  He’s going from cute-Audrey-courting to homicidal-Duke-killing awfully quickly lately.

Additionally, I am eager to learn more about the mystery guy who abducted Audrey and who’s fond of bolt guns.  He took that lady’s nose, too.  Her nose!  WTF dude?!  I can’t wait to find out what the heck is going on THERE!

There wasn’t nearly enough Dwight in this episode, either.  I’m just sayin’.