H.G. Wells penned the script for this film from the 101 Sci-Fi Movies to see before you die, and it is a sometimes bleak and depressing look at our future, though still ends with the possibility of hope, as to steal a phrase, ‘the human adventure continues…’

Our story begins in 1940, set in the city of Everytown, with the advent of a second world war. A war that lasts until the 70s.

But even then, the fighting continues, as the world, having collapsed into tiny decaying and ruined fiefdoms of city-states continue to make war on one another.

In Everytown, this fiefdom is ruled by a bullying, self-important ruler, who may in fact be more of a fore-runner for some of the political leaders we see today than would’ve been believed at the time.

Despite the lack of fossil fuels, and decreasing technical know-how, The Boss (Ralph Richardson – who would later delight me in the fantastic film Dragonslayer) demands, self-importantly, and like a spoiled little rich kid, that he NEEDs his airplanes to conquer the hill states. 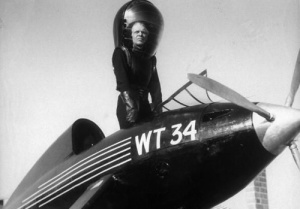 Things take a twist, when a sleek looking plane lands near to Everytown, and out steps John Cabal (Raymond Massey), representing the initial beginnings of a World Government created by a scientific elite. When he is seized by The Boss, the incident catches the interest of the elite, and they release what they call “peace gas” (which would seem to suggest that they drug and alter the mindset of these people against their will, in effect pacifying them – possibly not the wisest decision).

From there, we begin to leap forward in years as the people pull themselves out of their tribal states and begin to work together, unifying the world, making advances, creating a world of scientists and artists as the story arrives in 2036.

Here, Wells was off by a number of decades… The technology of this time looks pretty sweet, and familiar, flat screen tvs, holographic images, and a practical Utopia.

But they’re just planning on going to the moon now.

And this, of course begins to cause problems all over again, as a futuristic luddite (Cedric Hardwicke) thinks we shouldn’t be exploring the universe, we should be happy being the kings of our own little hill, instead of stepping out into the universe and realizing we’re so much smaller in the grand scheme of things.

There is an emergency launch of a rocket via a space gun (not much more than a giant cannon) as the luddite movement races to destroy the launch, unsuccessfully. As the film draws to a close,  Oswald Cabal (also Massey) gives a stirring speech at the end of the film suggesting that if we want it, the universe could be ours, we could be out there seeing and doing so much.

The Human Adventure is just beginning…

The effects, and design of the film looks fantastic, though I never did understand the correalation between the future, and wide shoulder outfits and capes.

In the end, the film feels more like a docu-drama than a sci-fi film, but I do like looking at older science fiction movies and seeing what they thought our future will look like. This one does that in spades…

Definitely worth a look.