Things got explosive, thunderous, and extremely over-the-top at the Scotiabank Theater last night for a red carpet premiere of The Expendables 2, featuring two of the cast, Randy Couture and Terry Crews (who is currently appearing on the brilliant show The Newsroom in case you still aren’t watching it).

If you saw and loved the first one, this film is just another serving of the same, but… well, more-so.

It’s so wonderfully mindless, so over-the-top, so filled with nudge nudge wink wink self-referential jokes that there was nothing we could do but buckle up and hold on for the ride.

Picking up a while after the first film, we pretty much pick up where we left off… with Barney Ross (Sylvester Stallone) and his group of guns, and fists, and knives, for hire, doing what they do best, blowing stuff up, and looking like they are having fun doing it!

After an explosive, literally, opening, Ross is confronted with three problems, his newest member, Billy (Liam Hemsworth) is debating leaving the life of an Expendable, Church (Bruce Willis) reappears reminding Ross that Barney owes him for mucking up the deal that constituted the action of the first film and gives them an assignment that may allow them to call it even, and Church saddles him with a babysitting detail, Maggie (the fairly awesome Nan Yu), who is there to recover a piece of tech that is the centerpiece of the mission.

“A walk in the park,” Church says.

But you know when someone says that, things are bound to go sideways, and just when the body count is still in the double, if not early triple digits, things go pear-shaped.

The film’s baddie, whose name is, I’m not joking, is Vilain (read as Villain) as played by Jean-Claude Van Damme, makes things personal for the team, and it turns into payback, and all out war, as the action gets louder, bigger, and the extended cameos get better and better. Jean-Claude actually seems to be enjoying himself in the film, and seems to delight in being a baddie, and he, much like the rest of the cast is still in pretty damned amazing shape.

Chuck Norris’ appearance (this is not a spoiler as his name is on the poster) brought claps and cheers from the audience and though his acting was never top-notch (or Top Dog if I can get as referential as the movie does) one of his lines got a huge round of applause and laughs!

The action sequences not only stretch credulity they push it to the breaking point, and you can’t help but grin and love every minute of it.

There’s a moment, literally a second, if not shorter, where all three titans, Stallone, Willis and Schwarzenegger are standing surrounded by shattering glass, weapons firing, and you know you’re in action heaven. 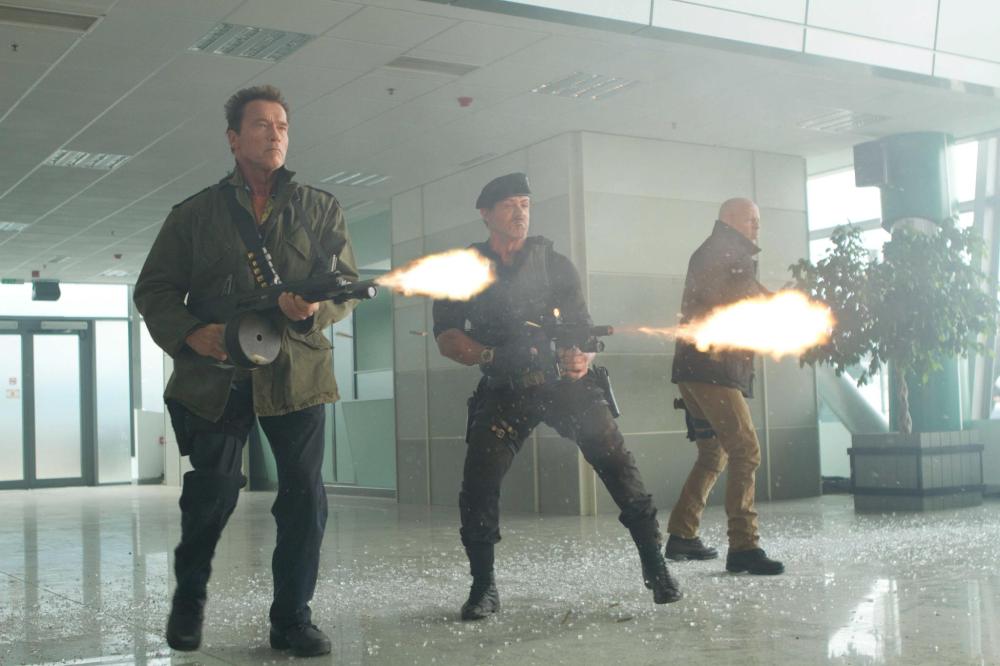 The editing and camerawork are solid and steady, with Simon West taking over directorial duties for Stallone this time around, and I would argue that this is his best film since Con Air.

Both Jet Li and Hemsworth are underused in the film, though I won’t go beyond that, spoilers.

We learned in the Q&A afterwards that the American Street construct that the Expendables hide out in while on their mission, was an actual Russian training ground in its day, and that just boggled the mind! It’s an awesome location, and must have been very eerie to shoot on. It plays host to a number of fun scenes, including a dinner scene, and a huge shootout.

Jason Statham, as Lee Christmas, is probably still my favorite of the bunch, I just find Statham imminently likable. Alright, I have a bit of a man-crush. He gets to crack wise, and kick some serious ass (and he knows how to handle his knives!), all while Barney advises he’s making a mistake with Lacy (Charisma Carpenter).

As in the previous film, every one of the stars, on both sides of this war get their moment, and best of all, is the fact that this time around, Willis’ Church, and Schwarzenegger’s Trench are in it for much longer than the first film and it’s a lot of fun watching the two of them and Stallone play off one another. Bruce and Arnold have a brilliant exchange that once again had our audience laughing and applauding.

For me there were a number of moments that reminded me of other series, there’s a huge boat chase, which made me think of Live And Let Die and Moonraker from the Bond series, all watched over by Billy playing sniper. Then, later in the film, when they stroll into a village (and don’t ask me how they all speak english… it doesn’t matter! Because it’s not important they just DO! Maybe they took courses as a village) there were shades of The Magnificent Seven. In fact Ennio Morricone’s The Good, The Bad and The Ugly theme gets used once to very nice effect.

This is a pair of movies that doesn’t pretend to be anything they’re not. They are action films, first and foremost, a violent update of the 80s action film, filled with familiar faces, brilliant weapons and moments, great, often belly-, laughs, chases, and explosions. It has the barest of stories, and do we really need much of one? It’s a slim string of connective material from which to hang some bloody, and enjoyable sequences.

If you love those movies of the 80s, and you know the ones I’m talking about, and enjoyed the first film, you know what you are going to get from this film, and knowing it, you can’t come out of the theater disappointed.

Keep up the good work gents, and come back soon…

and speaking of even before this one has been released, it opens this Friday, they are already talking about casting ideas for 3! They’ve apparently already signed Nic Cage, and have approached both Clint Eastwood and Harrison Ford to show in the next film!

Who would you like to see show up in the next round?