Now this is what I’m talking about! Continuum finds it’s feet again in what, for me, is the best episode since Episode 05 A Test of Time.

We open in the 2070s, where CPS Protector Kiera Cameron (Rachel Nichols) is apparently pulling some kind of guard duty at Sautech for a demonstration. A demonstration that is being put on by Liber8’s very own Lucas (Omari Newton). He’s showing that by using light patterns and repeated visual images and vibrations that people can be controlled. In this case, a soldier, which provides us with an interesting tidbit about the future again. Soldiers are indentured to the corporations for 20 years, and I guess by volunteering for the exercise it allows them to work off a chunk of their life debt.

The demonstration shows that there are still some glitches to be worked out, but everyone seems to love it.

Back in 2012, we get two murders right on top of one another. Someone strides in to a team-building exercise of paintball, and kills one of the players and then himself, then a young woman wanders onto a train platform, and throws her target and herself in front of the arriving train.

Carlos (Victor Webster) and Kiera learn that both of the murderers were beta testers for a game from Tendyne, while the victims were working for competing software companies.

Betty (Jennifer Spence) gets to come along (Team-building without the paint, as Kiera puts it) and with her computer and gaming knowledge learn that something is going on there. She and Kiera get to try out the immersive game that Tendyne is developing, and it triggers a collapse in Kiera, and a failure of her internal computer system and heads-up display.

Alec (Erik Knudsen)starts trying to figure out what is going on, and comes up with away to reboot her system.

Unfortunately, Liber8 were the ones who inserted this glitch/code into the programming, specifically so they could hack and take control of Kiera. 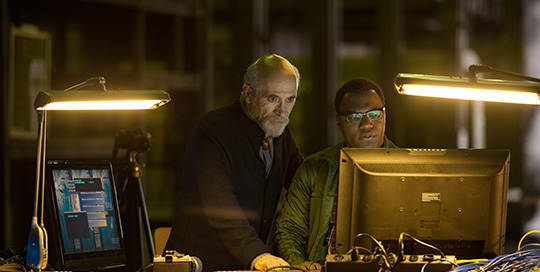 Kellog (Stephen Lobo) also figures out what is going on, and helps Carlos out, as Kiera is controlled by dueling hackers- Alec and Lucas, with the intention of killing the culprit at Tendyne, Carlos and herself.

We also get to see Kiera kick Carlos’ ass, which is awesome and still makes the whole fight two episodes previous seem that much more pathetic (sorry but true).

Alec defeats Lucas by simply turning Kiera’s chip off again. Kagame (Tony Amendola) and Lucas realize there is only one person in 2012 that has that kind of know-how, and are now onto Alec (and I think once they find his step-father and step-brother and their views, Liber8 will have a way into the family).

But that of course leads us to another interesting revelation…

While rebuilding Kiera’s firewalls, he found a hidden file, which he opens. There appears to be some deleted memories in there, as well as a file specifically addressed to the Alec Sadler of 2012. Insert troubling music cue!

This is the Continuum I love, and it’s good to see that it hits that pace again that they got up to with episode 5. The previous 2 episodes weren’t terrible by any means, but they certainly didn’t have the same pacing and combination of future tech/knowledge, action, and Kiera Cameron awesomness.

If the last two episodes of the season carry on with this momentum, it’s going to be a sweet ride, and I can tell there’s going to be a pretty wicked cliff-hanger to have us begging for more!

So Mr. Simon Barry, don’t drop the ball now! You’ve got an awesome cast and crew, and with this episode you have regained any momentum you lost, le’s blow the doors off the season finale in two weeks!!!