I remember seeing the covers for these magazines when I was a kid, collecting my first Star Wars comics, and even then at age 8, I was suitably intrigued by the covers. They gave me funny feelings in my tummy with all the babes, and all the cool sci-fi weapons, swords, robots and aliens that graced the gorgeously painted covers.

But I would never have been able to buy them and get them into the house without one of my parents seeing them.

Then of course, in 1981, the movie came along…. And I didn’t get to see it until 1996 when it was officially released for the first time on video-cassette.

For me, it was worth the wait, because except for the occasional project, no one works in hand-drawn animation anymore, it’s all rendered in the computer.

So this weekend, I decided to throw my blu-ray in and rewatch this cult-classic.

This film, along with Fritz the Cat showed me something that Asian culture had known for a long time… Cartoons aren’t all for kids, they can be for grown-ups as well.

The film is an anthology of stories, some from the magazine itself, and some written for the film, with a wrap around story about a globe of pure evil, known as the Loc-Nar, glowing green of course, wreaking havoc across time and space.

The voice acting is all done by some very recognizable voices like John Candy, Eugene Levy, John Vernon and Harold Ramis, and the stories wander from future-noir (set in a New York that looks like early concept art for The Fifth Element), to comedic adventure (with a lot of sex), to vengeance, and in one of my favorite segments, horror.

The B-17 segment, penned by Dan O’Bannon, follows a plane and it’s flight crew on a doomed mission. As their B-17 gets shot to hell, and almost all the men inside are killed, the Loc-nar reanimates them into zombies who kill the co-pilot and force the pilot to bail out.

Unfortunately, the story ends right where I wanted to know more! 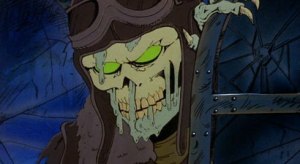 The pilot lands on an island that is overrun with worn and rusted aircraft, all of which are inhabited by these zombie-type beings.

Backing all of the animated tales as they fill their screen is a rocking soundtrack by some of the biggest rock bands of the late 70s and early 80s, Black Sabbath, Blue Oyster Cult, Cheap Trick, Nazareth, and Sammy Hagar.

There is also a fantastic score by composer Elmer Bernstein (who gave us the awesome theme from The Magnificent Seven as well as countless others).

The film isn’t going to be for everyone, the sequel really wasn’t, but if you’re looking for an entertaining sci-fi anthology film, like classic rock, and enjoy cartoon breasts and violence, chances are you’re gonna enjoy it.

What’s your favorite sequence or bit from this film?