I settled in for another documentary last night, having tracked down  one I’d wanted to see since I first heard about it.

A documentary dealing with the Toynbee tiles.

These tiles began appearing on roadways all along the east coast of the United States, and even so far as South America.

The tiles themselves are crafted with an odd message – “Toynbee idea in movie 2001 resurrect dead on planet Jupiter.”

The message itself is odd, and refers to Arnold Toynbee’s idea of dead molecules being brought back to life, as illustrated in the ambiguous ending of the classic Kubrick film, 2001, as astronaut Bowman dies and is reborn as the Star Child.

That in itself is just weird, and had already caught my attention. Add that to the fact that no one has ever come forward to admit to creating these tiles, that are buried in the pavement of busy streets, and you have a mystery right there in the face of the public that just begs to be solved.

That’s where Justin Duerr, and his companions come in.

The three of them start to comb through everything that is known about these tiles, mentions in newspapers, shortwave radio, a David Mamet play called Four A.M. and a call-in to a Larry King show.

The documentary doesn’t offer any concrete answers, but that’s because there may be none to give. The intrepid trio get close, in fact, they are fairly confident they learn who may have created the tiles, but it’s all conjecture, hearsay and supposition.

It doesn’t make the mystery any less interesting though, it helps it to endure.

And one of our enduring traits as a species is our curiosity, our desire to know, to learn and to explore.

If the documentary does anything, it definitely tweaks that sense in us.

To steal a quote from the television show The River…

“There’s magic out there…” 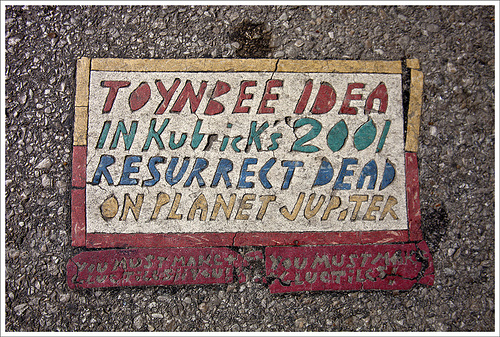