And sadly, I think it’s not going to find as much of an audience as I would like it to here in North America. There’s not enough flash to hold the attention of the younger movie watchers who make up the large percentage of cinema goers. I think it will find an audience with the older ones though, as well as the ones who feel they don’t necessarily need to be pandered to and lead from point A to point B step by step with over simplistic plots.

This film certainly doesn’t question the audience’s intelligence, it expects you to watch and infer, to know enough about human behavior to understand some of the characters actions and reactions.

But after the director’s previous film, not to mention the film’s subject, I would expect nothing less.

Director Tomas Alfredson’s previous film was one that I raved to everyone I could when I still worked in a video store (if anyone remembers what those are anymore). Let The Right One In was one of the best vampire movies I had ever seen, and I do like my vampire movies. There were moments in that film, little side plots that were inferred and hinted at, that the serviceable (and yes admittedly good) American remake, Let Me In, felt they simply had to explain instead of letting the audience figure it out.

Adapted from John le Carré’s classic 1974 novel, Tinker, Tailor, Soldier, Spy takes us back to the height of the cold war, where after a blown op in Budapest which results in the loss of an agent (Mark Strong), George Smiley (Oldman) and his boss, code-named Control (John Hurt), have been forced-out of MI-6, known as “the Circus”.

Control, however, has one last mission for Smiley, to uncover a Russian mole in the highest echelons of MI-6. 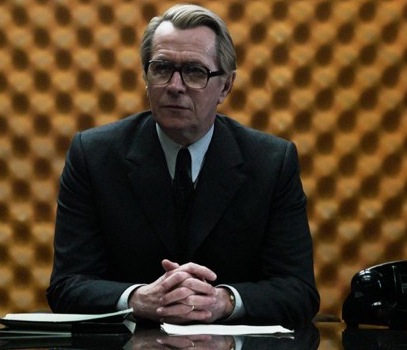 It’s impossible to find the right word to describe Oldman’s performance. The man is a chameleon unlike any other actor of this age. He always IS the character, he’s never Gary Oldman playing a character, he’s been called the modern Lon Chaney, the man of 1000 faces, and though that compliment has bee paid to him before, I will happily give it to him again.

Staring out from behind a huge pair of glasses that give you the impression that when he looks at you, that he’s coldly studying you, and he gives nothing away. But then in other moments, you can see the wheels turning, as he puts the pieces of evidence together, seeing how they fit. You also get the impression that he always knows more than he tells you, and he’s a lot smarter than those he’s dealing with as well.

Which is saying something, because his assistant is Sherlock Holmes.

Benedict Cumberbatch plays Sherlock in the outstanding BBC series anyway. Here he works with Smiley to steal files and information from The Circus to suss out the mole, being run by the Russian known only as Karla.

Watching the pieces come together, in this grimy and dirty looking 70s is a treat, though as mentioned above, it won’t be for everyone.

The last half of the film, as we build up to the reveal of the mole, Alfredson keeps tweaking the tension, til you realize you’re on edge asking yourself “When did that happen?”

I also found myself falling in love with not only the look of the film, the set design of The Circus was realistic and functional and yet engaging, as well as the locations used through out the film, but the film’s score as well. I usually recognize the names of the composers, but this one, Alberto Iglesias was new for me, but I’ll be listening for his work from now on.

The film has a stellar all-star cast of top tier English actors, Oldman, Cumberbatch, Hurt, Strong, Toby Jones, Colin Firth, Ciarán Hinds and Tom Hardy and each one of them brings their A game. It would’ve been something to be on set to watch this group of actors working together.

If you’re looking for a film that isn’t gonna take you by the hand and walk you through every single plot point, and hammer you over the head with endless exposition to make sure you got that point, and would like to see a film that respect’s your intelligence, as well as a fantastic cast and crew working with a classic story then you should definitely take the time to visit with Tinker, Tailor, Soldier, Spy.