Airing on 7 January, 1991, this Data (Brent Spiner)- centric episode did something that hadn’t been done in Star Trek before. It gave us a ‘day in the life’ episode. It also further cemented Miles O’Brien (Colm Meaney) in the Trek Universe.

Written by Harold Apter and Ronald D. Moore, the tale follows Data through his day as he relates it to Commander Maddox (Brian Brophy, last seen in the second season episode Measure of A Man).

Data is commenting about his friendships with those on the crew, as well as his serving as the ‘father of the bride’ for Keiko Ishikawa (Rosalind Chao). Keiko is supposed to be marrying O’Brien, and the relationship takes a wonderful tumble throughout the course of the story.

I do like the continued interaction between Geordi (LeVar Burton) and Data, and this is the first time the android refers to the engineer as his best friend. We also learn about Beverly Crusher (Gates McFadden) not want to be referred to as the Dancing Doctor – a wonderful sequence.

This episode fills out our characters a lot, and it’s a truly enjoyable episode. It also gives us a bit of mystery and political thriller with a subplot involving a Romulan and a Vulcan ambassador (Sierra Pecheur).

We get a look at a number of new locations aboard ship, as well as adding pieces of new continuity that will run through the course of the series, including Data’s cat. 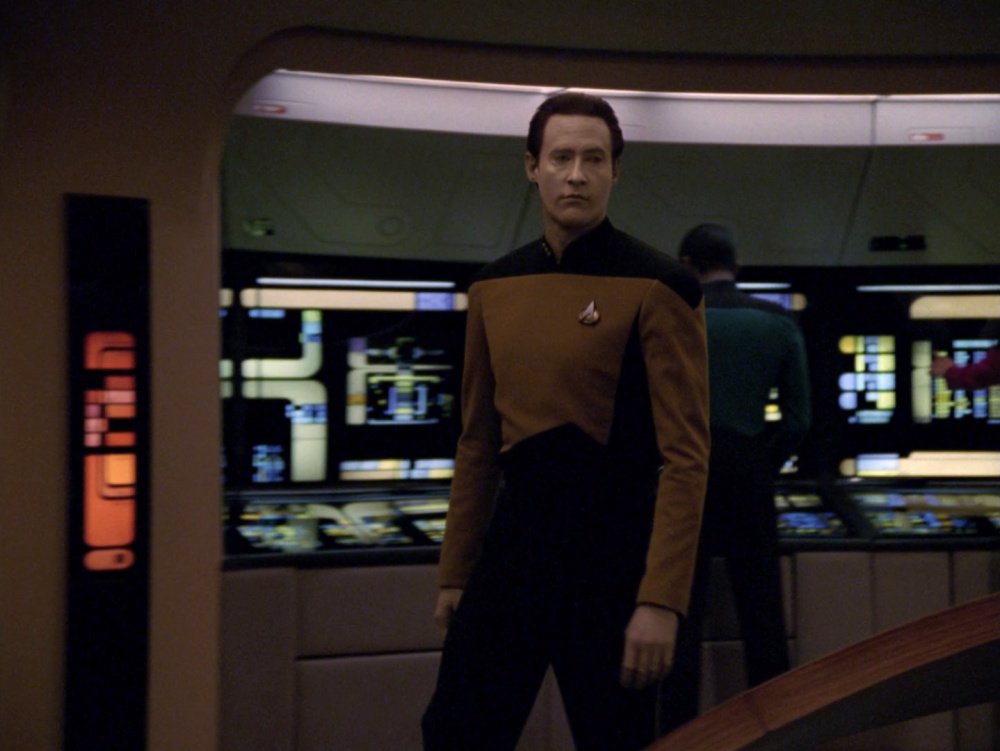 Debuting on 28 January, 1991, Jeri Taylor pens the teleplay from a story by Stuart Charno, Sara B. Cooper and Cy Chermak. It gives our first real introduction of the Cardassians, a race that will continue to be relevant over the coming series.

Picard (Patrick Stewart) and the crew of the Enterprise are assigned a mission to track down one of their own. It seems Captain Benjamin Maxwell (Bob Gunton) has been accused of attacking a Cardassian science outpost, and has lined up a cargo ship as his next target.

O’Brien proves invaluable to Picard, as he had previously served with Maxwell, and O’Brien is convinced there must be something going on.

The Cardassian commander, Gul Macet (Marc Alaimo) is dubious as to whether Picard will do everything he claims he will, but Picard is dedicated to duty.

Meanwhile, wounded parties on both sides of the conflict reminisce about the terrors and horrors of war.

In terms of continuity, this episode lays some groundwork for the next series that would debut in 1993, Deep Space Nine, and it features the only appearance of the ridiculous head gear worn about Macet’s ship, as well as any hint of facial hair.

It also allows O’Brien and Keiko’s relationship to develop as the pair find their way in their newly married life, and O’Brien’s past with the Cardassian conflict.

And the reveal at the end of the episode that both sides have been lying about things, and neither side is completely innocent. A pretty important message.