Sam (Scott Bakula) leaps into Darlene Monte on 7 June, 1958 in the first episode up this week. Miss Deep South was written by Tommy Thompson and originally aired on 2 November, 1990.

Sam finds himself in a beauty contest, and has to save a fellow contestant, Connie (Heather McAdam) from making a terrible mistake by posing for nude photos for the pageant photographer, and would be charmer, but definitely a slime, Clint Beaumont (David Allen Brooks).

But not only does Sam have to save Connie from a mistake, he also has to make sure Darlene places no lower than third in the contest! It seems that Darlene uses the winnings from the contest to pay for her education and becomes a cardiologist who saves countless lives, and Sam can’t screw that up.

The pageant is run by Peg Myers (Nancy Stafford), who may have a connection to Clint, but won’t stop him from taking advantage of the young woman. Sam also has some problems with the sexist nature of the judge’s committee.

Al (Dean Stockwell) quite enjoys being involved with the contest,  even as a hologram, and he may have to give Sam some pointers.

I do like that it, once again, deals with some serious material, and makes some pointed remarks about sexism, exploitation (both the pageant and the Clint’s work delve into this. Heck, even Al’s rampant libido can be brought to task on this as well), but also couches it in a lot of fun moments – his musical number Cuanta La Gusta.

It provides a lot to think about. Black on White on Fire is a serious episode that first aired 9 November, 1990, and was written by Deborah Pratt.

Sam is Ray Harper, a young African-American with a promising medical career ahead of him with a potential internship at a Boston hospital. Unfortunately, he’s about to find himself in the midst of the Watts Riots.

It’s 11 August, 1965, and Ray not only has the problems of the race riots that will tear the country apart, but he’s also engaged with a young white woman, Susan Brewster (Corie Henninger), something that is frowned on by those in his neighbourhood.

Things become even more complicated because Susan is the daughter of Police Captain Paul Brewster (Marc Alaimo) and Ray’s brother Lonnie (Gregory Millar) who is angry and hates with a ferocity that is terrifying.

Pratt proves once again that she not only tells an amazing story, but can take on the social issues to generate discussion, without hammering you over the head with it.

It’s not all perfect, and I have no doubt that the story would be done differently today, but it still makes a point.

He’s there to make sure that Ray and Susan stay together, but the riots may end up taking her life. Sam has his hands full this time around.

Cch Pounder guests as Lonnie and Ray’s mom who has dealt with the hate for so long, yet has hope for change, for a better future.

It’s a brutal episode, one that seems just as relevant today, perhaps even more so… 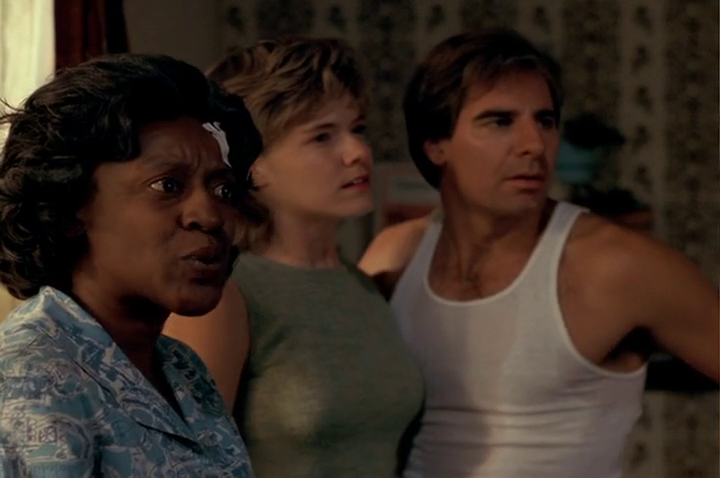