The IRS causes problems for everybody in the first episode this week! There’s Just No Accounting was written by Frank Lupo and aired on 24 March, 1982. This episode ends up being a lot of fun, very whimsical, and lets our characters just behave as we know they should after a couple of crazy episodes.

Ralph (William Katt) is being audited, so he’s going through his receipts and bills, while trying to help Bill (Robert Culp) work on a kidnapping case. It seems a young girl has been kidnapped, and despite SAC Carlisle (William Bogert) convincing the parents not to pay the ransom, to find another way, but Bill convinces them to come up with the money, because he knows Ralph, thanks to the jammies, will be able to recover it.

Unfortunately, during the chase, and subsequent shootout, all of Ralph’s receipts get blown out the car window. The bumbling superhero rescues the girl, and heads home to meet the IRS auditor, Byron Bigsby (James Whitmore Jr.), who comes across the suitcase full of money, which Ralph hasn’t returned yet…

From there things get worse and worse for everyone involved, Bill gets suspended for losing the money, the IRS has it, and now, it seems, everyone is getting audited. And now, someone is taking shots at our heroes! But who, and why?

A light and fun episode, and one that sees Ralph getting better at the telekinetic stuff associated with the suit, though Bill finds some of it annoying. 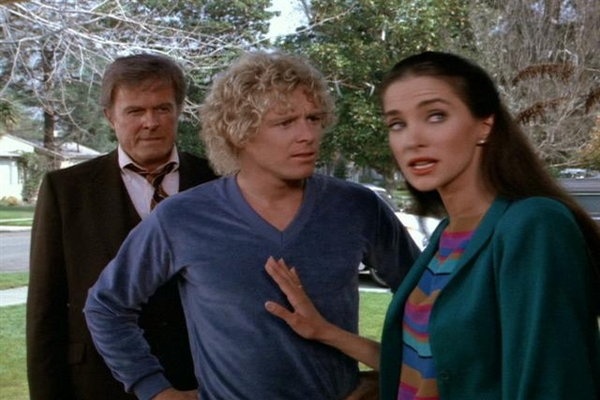 The Good Samaritan is up next. This one originally aired 21 March, 1982, and was penned by Rudolph Borchert. Ralph decides he wants to start helping people with the suit, instead of just stopping the baddies. Not a bad idea, but the episode feels cobbled together from a bunch of B-story lines. There’s a lot going on, which I guess is supposed to convey the amount of help Ralph can do but, none of the stories seem full enough.

Ralph finds himself helping an elderly man, Mr. Hagert (Keenan Wynn) who is being forced out of his home, a home full of memories of he and his wife. But Bill may have an option, as it seems like the bank isn’t going to be held accountable for this at all (something Ralph should really have gone after).

A man, Tanner (Dennis Lipscomb), who usually loots buildings that are on fire, stealing things during the confusion, is put in the role of hero, thanks to Ralph’s help, and begins to rethink his whole life.

And then there is little Johnny (Joshua John Miller), who is lost in a national park, and they’ve had to call off the search as temperatures are plunging. Ralph and Bill may just be in time to save the little tyke!

I do like the fact that we see Bill munching on some dog biscuits again, haven’t seen that for a while, and there’s also an appearance by Carmen Argenziano as a bank robber.

This one tried to do a little too much, and lost a throughline, but it was fun to see the characters interacting, chatting, and just being together.