Usually when I read a book, I am transported to some faraway land and introduced to characters and situations which ignite my imagination and leave me breathless in anticipation of what might come next.  The really good ones have had me scrambling for more from the moment I read the final few lines.  I don’t usually read a lot of non-fiction, either, but I knew from the start that I’d be picking up Chris Hadfield’s book.  What I didn’t know, however, was that it would not only have all of the qualities of other really good books I’ve enjoyed, but it would also have something entirely new to me – for the first time, I found myself reading a book that had so much in it for me to apply to my own every day life that I feel the need to go back and read it a few more times, just to make sure I caught everything!

Tim and I were some of the lucky folks who were able to catch Hadfield’s talk in person at the Toronto Reference Library a few weeks ago.  I’d had a heck of a time landing tickets for it (they sold out in 30 seconds and crashed the website twice), but the moment I had them, I hatched a plan to grab a copy of the book at Indigo on my way home from work the next day.  I was going to get it, anyway, but I wanted to wait and not jinx the ticket-acquiring (just…let me have that one).  I finished reading whatever I was on at the time, and then dove into An Astronaut’s Guide To Life On Earth with a few days to go before meeting the man himself.  I was actually starting Chapter 8 by the time I was able to shake his hand and get my copy signed, and already he more than had me hooked.  He had me learning.

The thing about Chris Hadfield is that he’s so darn likeable!  He’s funny, intelligent, charming and straightforward.  In some ways, his mind works like mine does, but in a way more analytic and logical manner.  He’s humble, and has no shame in admitting his own mistakes, because he’s learned from them, and hopes others can, too.  I was thrilled when it was a Canadian commander heading up to the ISS for a several month stay, and I was bursting with pride when I realized how awesome our particular commander was.  He not only conducted cool experiments up there, and made the crazy-famous Space Oddity video, but he shared as much of his experience with the rest of us as possible.  He posted photos of our world from a point of view which billions of us will never have seen with our own eyes.  He made recordings of how different part of the space station sound.  In essence, the one-time Sarnian who is so down-to-earth it’s easy to imagine kicking back and having a few beers with the guy – he made space and astronauts cool again.

Like most kids my age, I grew up dreaming of going into space.  There was a time when everything at school shut down and we all gathered in the gym to watch the space shuttle launch.  Or we got up at some ungodly hour of the morning, depending on time zones and such.  I saw Spacecamp I don’t know how many times and wished I could go there to learn about being an astronaut and maybe have some accident happen so that *I* could go to space for real, as well.  I was absolutely devastated when the Challenger exploded after take-off…it felt like Christa McAuliffe took all our hopes and dreams with her that day, and it really wasn’t until reading Chris Hadfield’s book that I understood why.  To me, astronauts had always seemed to be kind of super-human; beyond reach, and beyond the scope of my personal experience.  But McAuliffe, she was a teacher first.  I had teachers, too, so I could relate to her a little better, even though we’d never met.  She was human, and not so different from me.  That’s how I feel about Chris Hadfield, as well.  He’s kin of an everyman – a relatively normal guy who’s done some pretty remarkable things.  The kind of guy who works hard his whole life – gets to go to SPACE – and then still has the presence of mind to show us cool things like what it looks like to wring out a wet cloth in zero gravity.  He didn’t just go up there, do his job, and come home.  He found a way to bring outer space just a little bit closer to the rest of us back here on Earth.  And that’s something I don’t think anyone has ever done before.  Not for me, at least.  At 40 years of age, I became a giddy, dream-filled kid again, and all because one man took the time to make the most of his experience on the ISS, and also used the tools at his disposal (and at his son’s insistence) to share some of that magic with us. 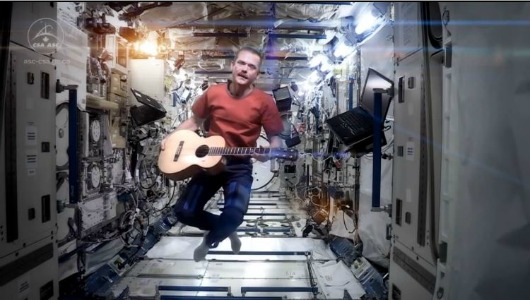 Now, as for the book itself, it is chalk full of…not even advice, actually.  It really is more like a guide.  If you learn anything from it at all, it’s not because Hadfield is forcing his opinions down your throat and telling you how to live your life.  Rather, he’s telling you how he’s lived his life – the mistakes he’s made, the successes, the highs, and lows – and letting you take what you will from that.  I pretty much wanted to just make a huge list of notes and ideas, because every chapter gave me tools to do things in my life a little different, or reinforced my notion that sometimes I’m on the right track.  Not that there is one right track, of course, but I found that Hadfield’s mind works similarly to mine, but he was able to put to words some things that have thus far been only vague notions for me.  To top it all off, you get an awesome astronaut’s-eye-view of the world from afar, and what it’s like to travel in space.  From leaving the planet to touching back down, to the months of rehab his body needed to get used to living with gravity again – all of it is told with equal parts candor and humour, making it seem as though you are right there with him the whole time.

And, really, I felt like I was almost as thankful for his wife and kids as he is – not nearly so in reality, of course, but their strength as a family unit really shines through in Hadfield’s writing, and it’s obvious that he wouldn’t be the man he is today without their love and support.  I’m grateful they were able to share some of him with us, actually, because some of my own perspective has changed as a result of his last mission, and even more as a result of this book.  I had trouble putting it down, but – in reality – sometimes I have to go to work, and to be even remotely effective there, I have to have slept.  Even so, though, I finished it rather quickly for me lately, and found that – even though I was soaking up every word and trying to retain everything at once – I didn’t have that familiar sadness/dread that comes with nearing the end of and finishing a really good book.

Instead, I started trying to figure out how to write about it – and planning when to go back to the beginning to start reading it all over again.

An Astronaut’s Guide To Life On Earth by Chris Hadfield is available wherever books are sold.